Around the Campfire – Walking for Wildlife

Images & Text by Anja Riise
This past Saturday, Madikwe Game Reserve hosted its second annual Rhino Walk, to raise awareness of the species’ situation. Last year, 1175 rhinos were killed in South Africa alone, mostly for the alleged medicinal properties of their horns. They are thought to cure anything from a common cold to cancer, as well as enhancing sexual performance. Since the horns are made up of the same material as fingernails and hair, this belief is of course utter nonsense, something which has been proven scientifically a long time ago. However, tradition is difficult to crush and if something is expensive, it also becomes a status symbol and measure of wealth. 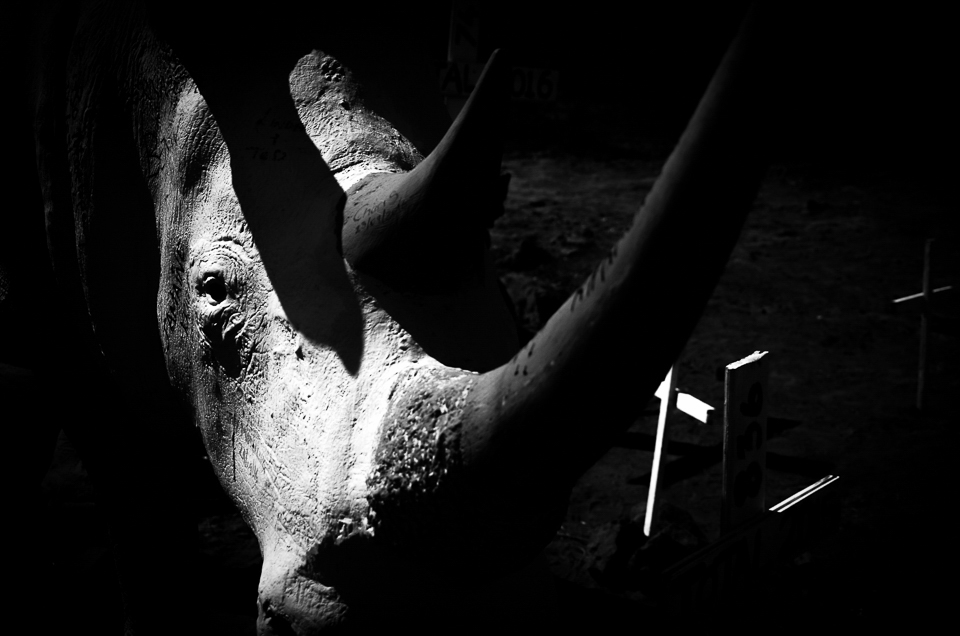 As it stands now, there will be no rhinos left in the wild as the next generation of young South Africans reach adulthood. Telling your future grandchildren that you once saw these magnificent creatures on game drive in the African bush might sound as foreign to them, as it would have for us if our grandparents had said they once saw dinosaurs roaming the plains…

On Saturday the 24th of September, about 480 people participated (with about 200 walking) in the 5 km Walk for Wildlife that was organized in Madikwe. Not only lodge guests and staff took part in the event, but also school children from the surrounding communities. A flicker of light is the fact that these kids are aware of the situation and that the communities are getting involved and showing their support. With that, it is more difficult for poachers to hide in their midst, without being reported. There are many dedicated and passionate people working hard to protect the rhinos all around the continent, putting their lives on the line each time they go to work. They have already earned our respect, they however also need our support… economically as well as by helping out reporting any suspect vehicles, people and behaviour. 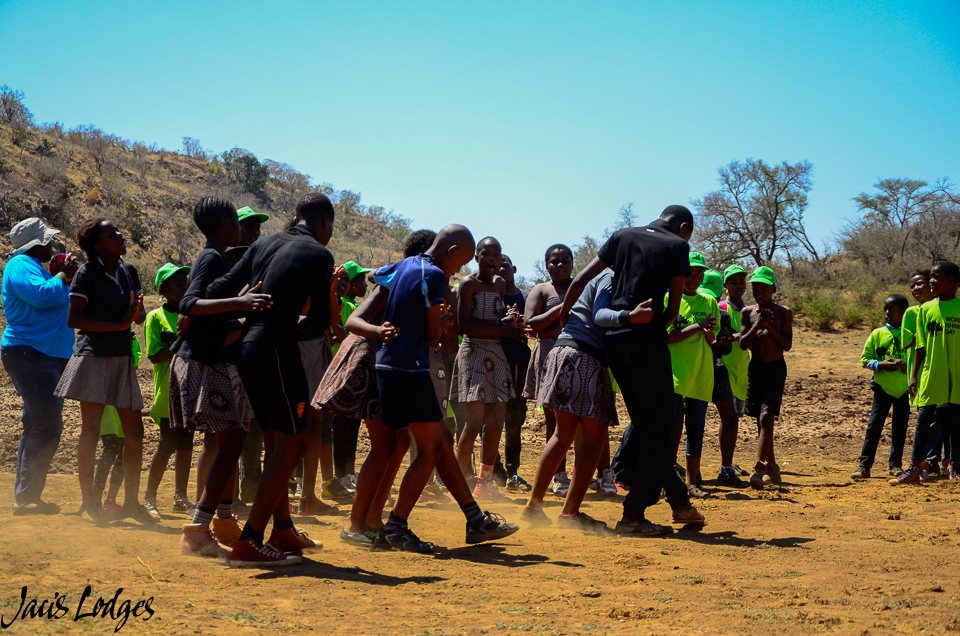 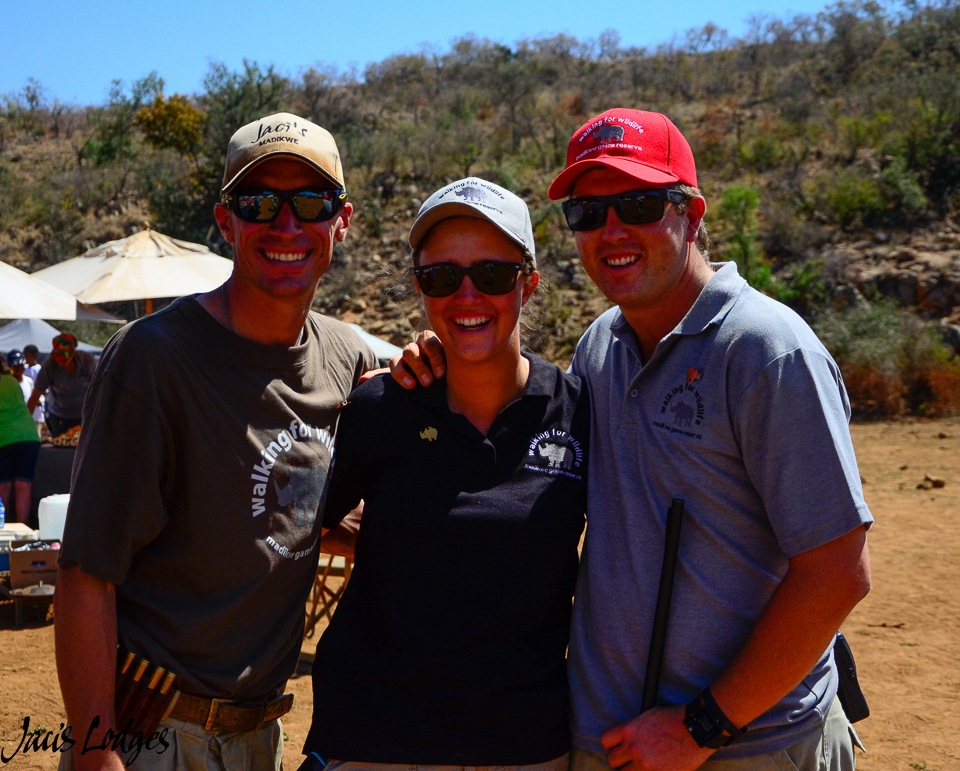 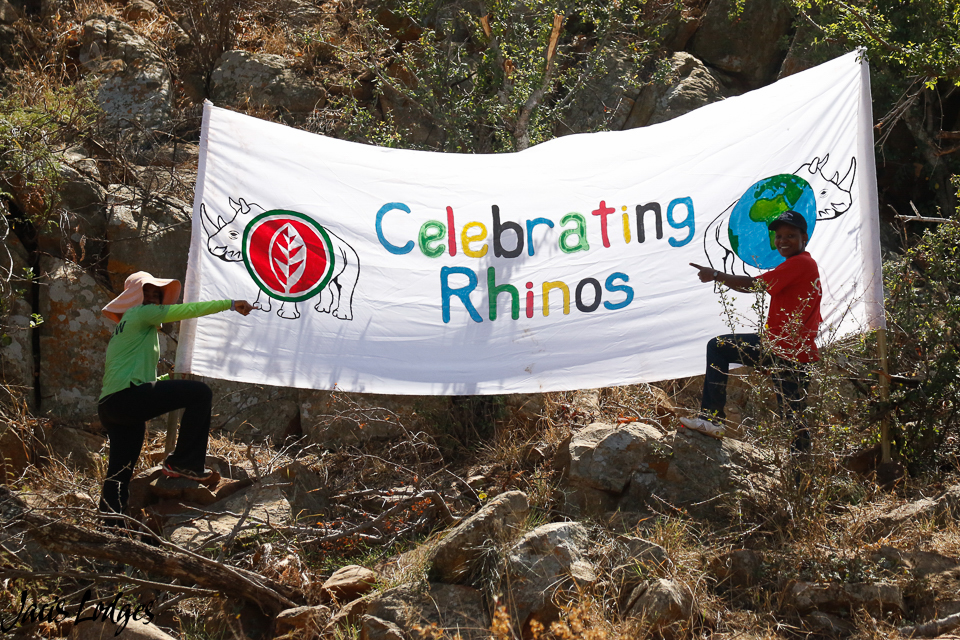 In the early morning, many of the field guides pulled in to the starting point of the walk with their guests, after morning game drive. The usual morning coffee and rusk break was taking place while chatting to other guests, guides and rangers of the reserve. There was also a chance to have a look at some of the guides’ posters and artwork that had been crafted to raise awareness about, not only the rhinos, but also other endangered species, as well as buying merchandise in support of the work to protect the rhinos. 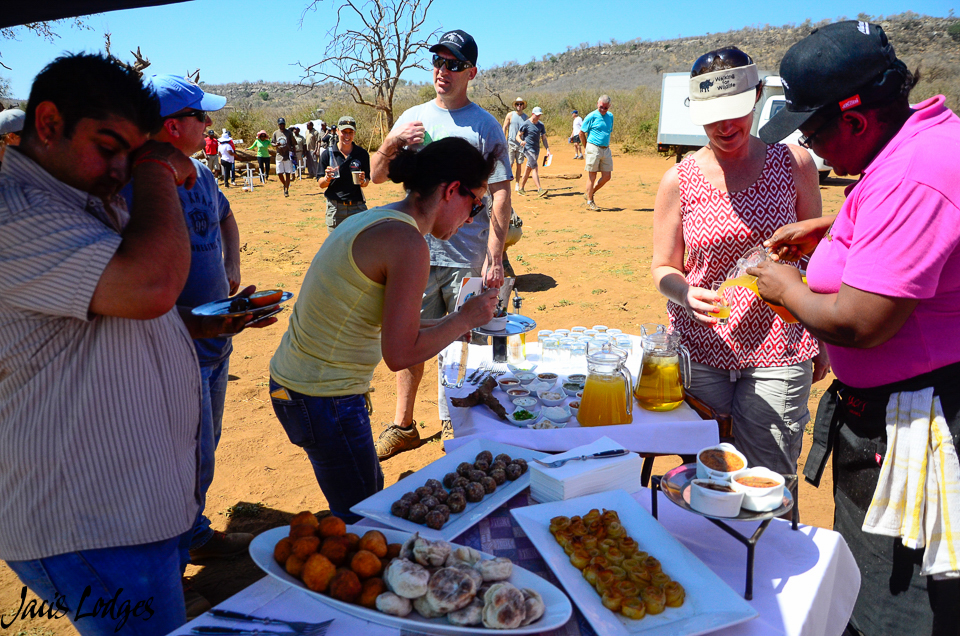 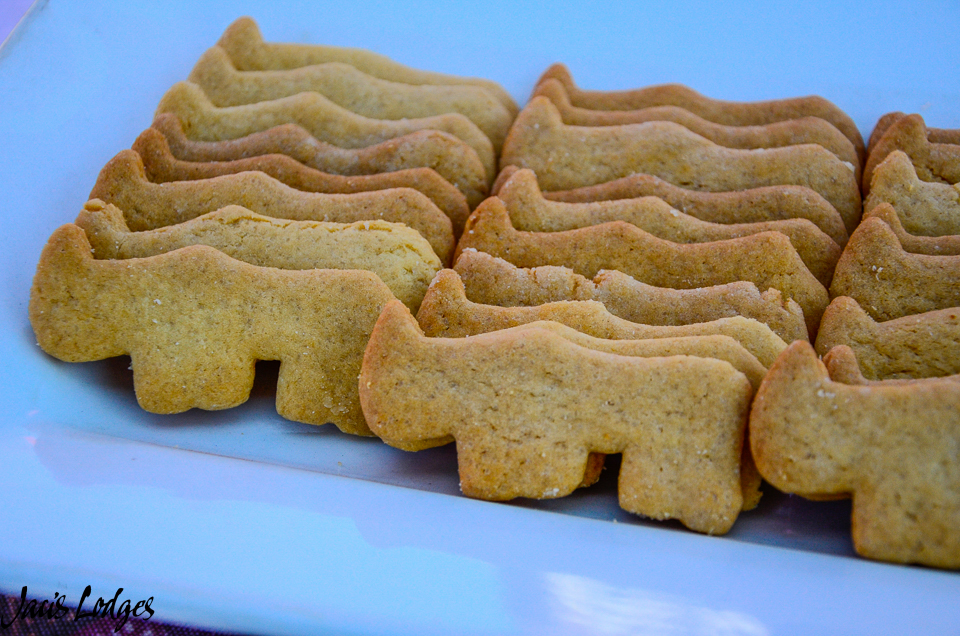 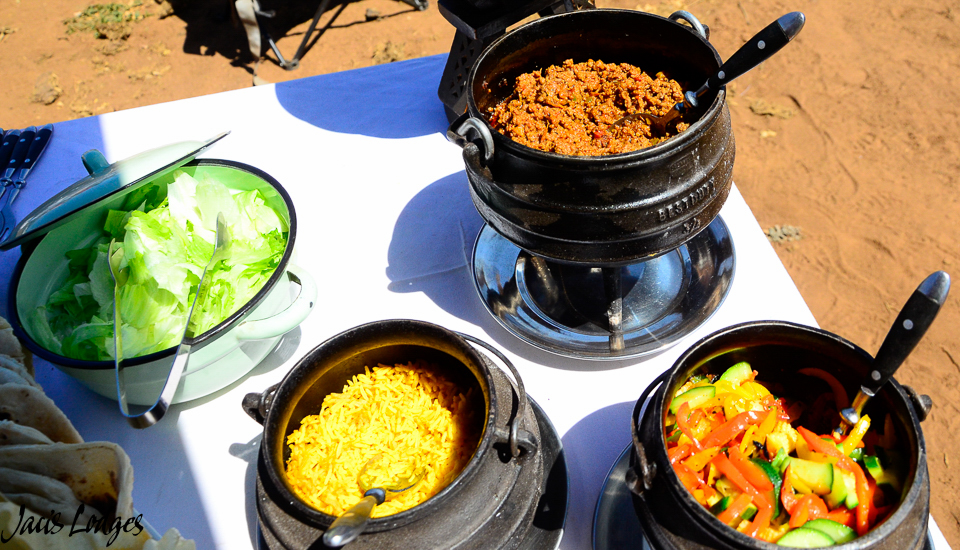 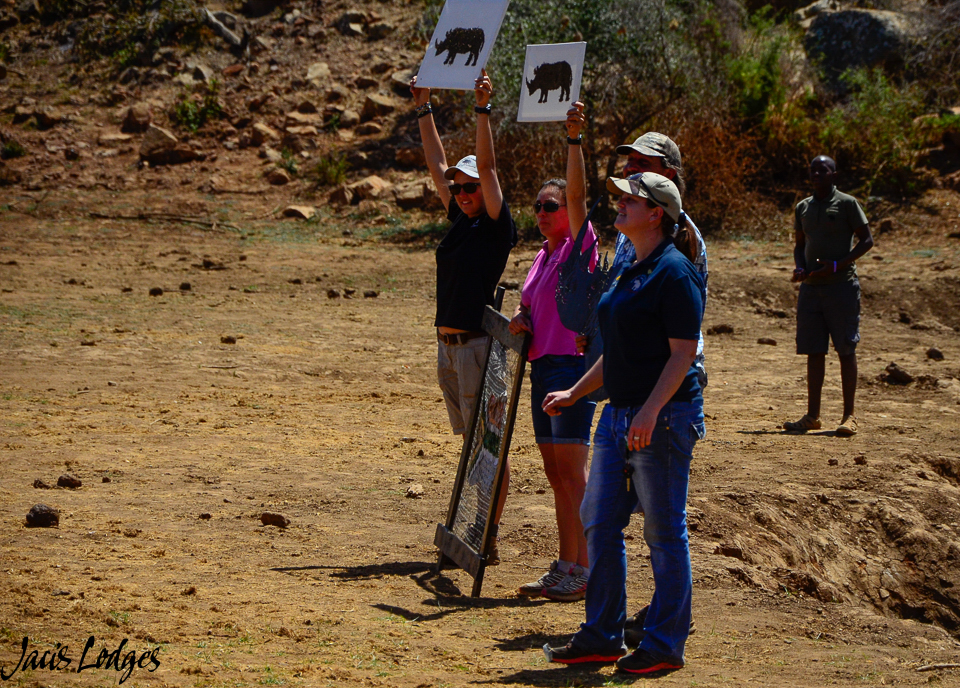 At nine the walk commenced, with some of the reserve rangers leading the 5 km walk. To demarcate the route, white crosses had been set up. Though the theme of the day and the reason for the walk may be a sad one, the atmosphere was still bright and hopeful. Many guests expressed gratitude for being granted the possibility to take part in the walk. Helping towards a very precious goal, while enjoying the wildlife on holiday was rewarding and satisfying. 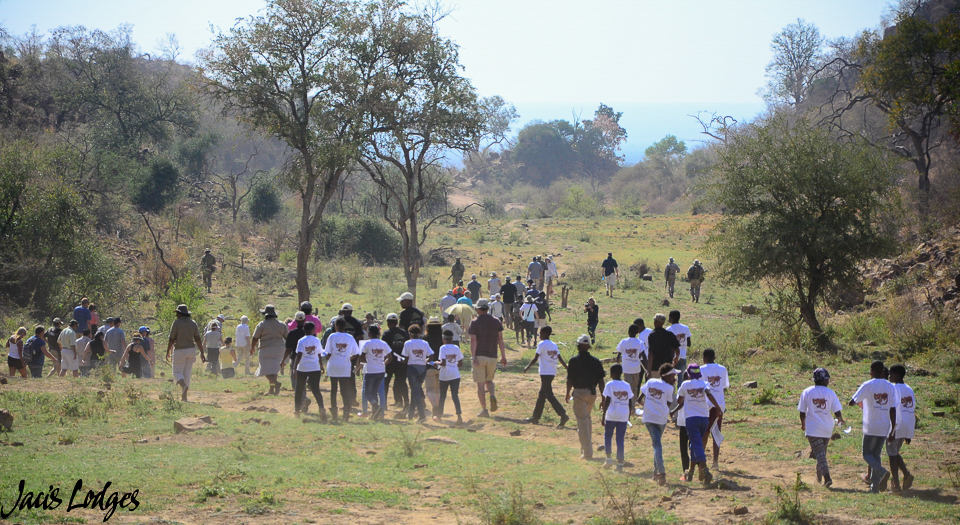 A lot of activity had been taking place while most people were out on the walk and as they started to arrive back at the starting point, there was food and cold drinks waiting for them in a lot of the stalls, managed by the different lodges. This was of course a welcome sight and the chefs quickly became the stars of the fair. Our head chef Virginia’s deconstructed bobotie, orange-poached eggs, date balls and rhino biscuits at Jaci’s Lodges’ table swiftly made their way off the trays, as did the kebabs, ribs and wors rolls at the other lodges’ stalls. Everyone mingled with everyone else, in the increasingly warm morning, while enjoying the bush brunch. 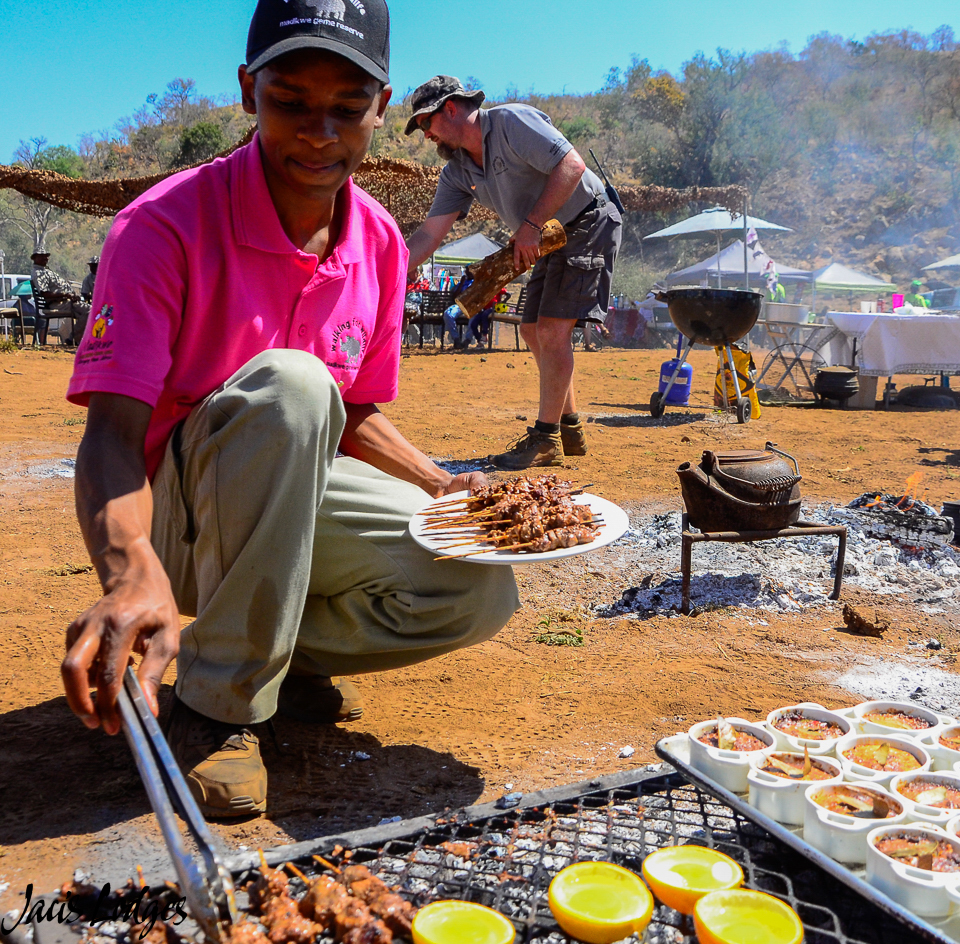 The rangers, who are the unsung heroes in the struggle against poaching, made it clear that you don’t want to be on the receiving end of their efforts in the bush. In a cloud of dust and thunder, they burst into action, showing off their skills in a short but assertive shooting session, enough of a deterrent for anyone with devious plans. As the sound of the rounds echoed out over the valley, the day was rounded up as the heat settled upon us. 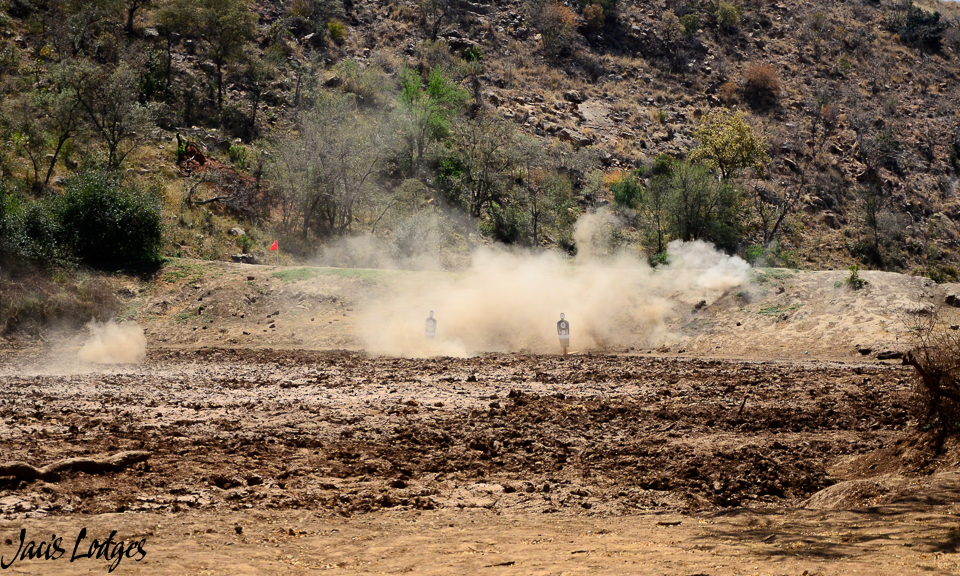 Some of the guides’ very creative  and beautiful artwork, made out of rhino dung, scrap metal and bottle caps, was auctioned out at the end of the event, securing some added revenue for the cause. On this day alone, a substaintial amount was raised by the, over 480 participants, to support the work of the anti-poaching team and others in their efforts to keep our wildlife safe. 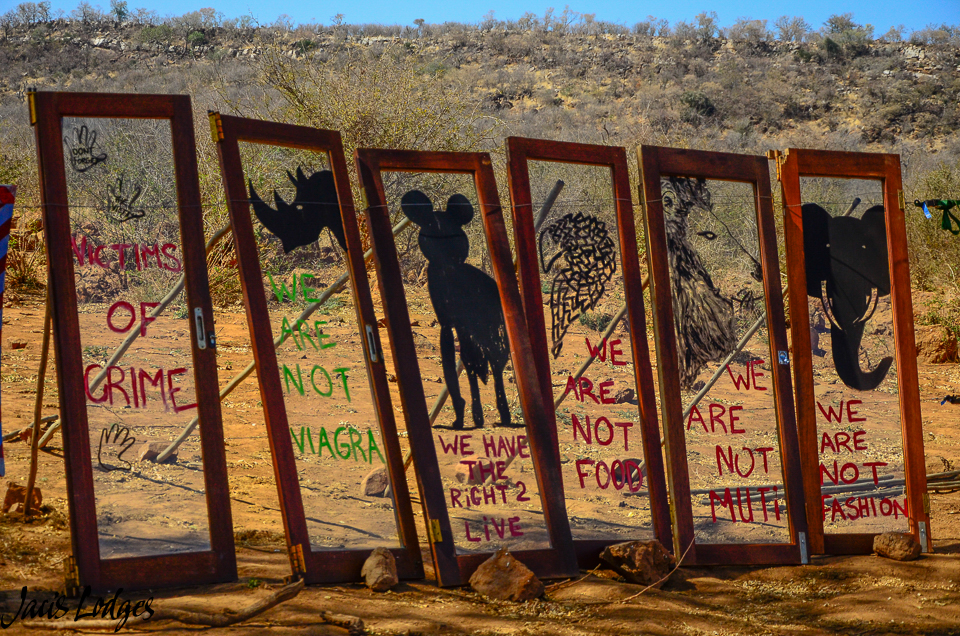 SABC was on site, documenting the whole event, resulting in a clip on the evening news, as well as an article. All the attention, support and good will on this day will hopefully be carried forward and make a difference for the future of the rhinos. There is still time to turn things around if we take action and this is the message we were left with. We have the chance to save a species from extinction and make the rhino a success story yet again. South Africa was very much involved in saving the white rhino from extinction only in the last century and if we join forces, it can definitely be done once more. 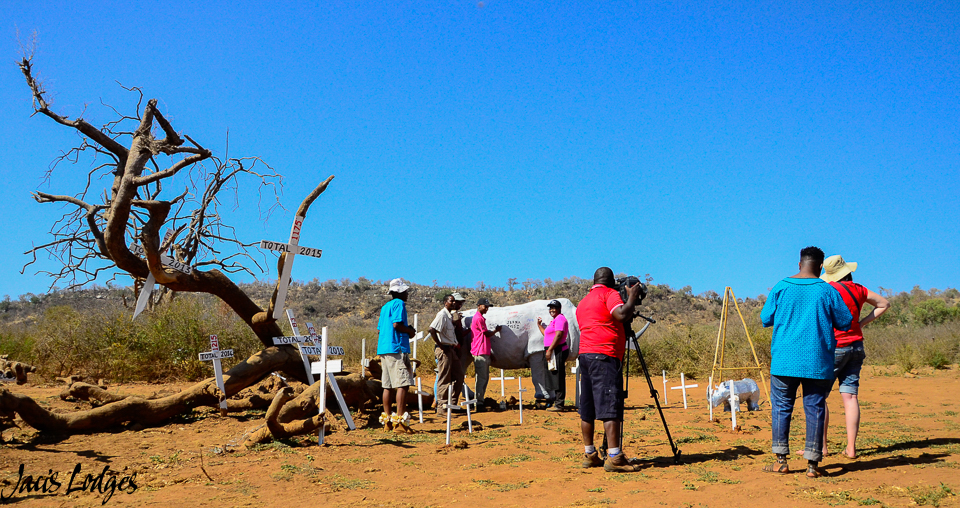