Around the Campfire – To Bee or not to Bee

Let’s look at the colourful collection of Bee-eaters that can be found at Jaci’s Lodges in Madikwe.

Let’s look at some facts –

Out of the 6 species, there are only two that are not predominantly bee catchers and eaters, but do not count them out completely, as in their diet there are bees and wasps as well, but this is not their main food source.

So the answer to the initial question is a definite “Yes” – we can say that All Bee-eaters do eat bees but some more than others.

We have to say this species of birds are amongst the most colourful of avian visitors and it is always nice to stop and admire, photograph and chat about them.

Let’s look at each of individual varieties a little closer –

This is the most common bee-eater we see in big flocks flying around the lodge water hole and around the reserve. They predominantly feed no bees wasps, flying ants and termites.

They are migratory – hence the name, because you will find them East Europe, Siberia and South West Asia in the northern hemisphere summers.  A Russian-ringed bird has been tracked migrating all the way to Southern Africa and the ring was recovered in Zimbabwe.

They occasionally migrate with Blue-cheeked Bee-eaters, in high upper airspace, travelling in major movements, in broad fronts up and down the Nile and Rift Valley’s.  They then pass though Zambia in mid-September and arrives on our door step in mid-October to spend the summer here revering this trend again in March and April as they head north.

They breed in late December as monogamous pairs, which are part of large colonies. They move as far south as the west coast near Cape Town to nest and then move inland to mountains areas like the Cederberg were they stay until about Jan-Feb. From here they start moving back up to the northern parts of South Africa, en-route back to Europe. 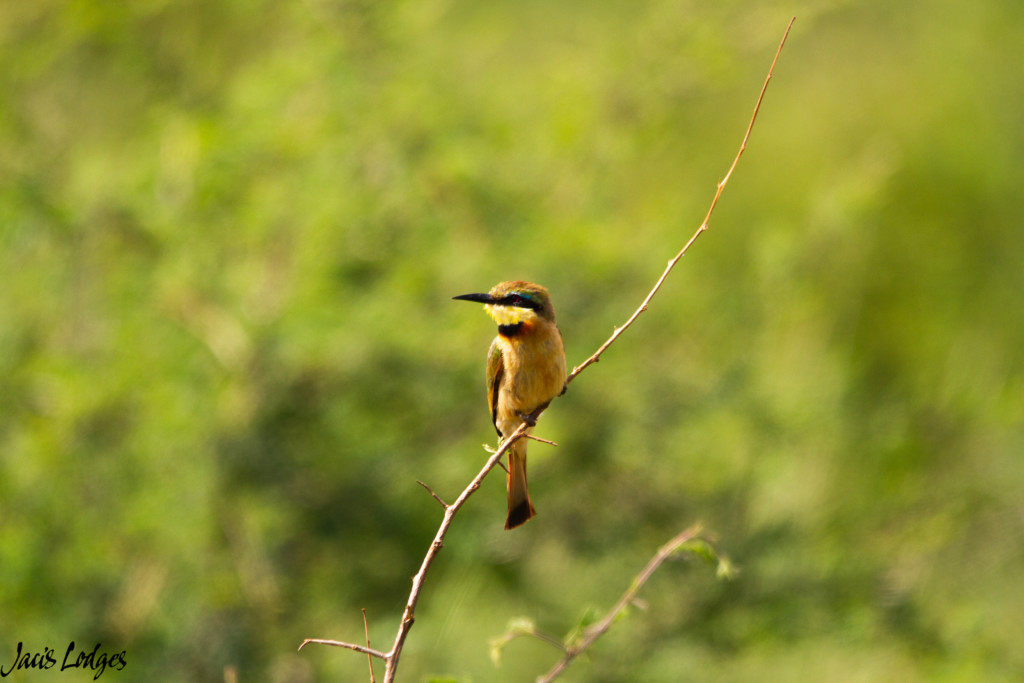 At 15-17cm in length, this is the smallest and the most common Bee-eater found in Madikwe. Unlike its cousins you see them throughout the year, as they are resident. They are also monogamous, but do not live in colonies.

Members of this species, like other bee-eaters, are rich and brightly-coloured slender birds. They have green upper parts, yellow throats, black gorgets, and rich brown upper breasts fading to buffish ochre on the belly. Their wings are green and brown, and their beaks are black. They reach a length of 15–17 cm, which makes them the smallest African bee-eater. Sexes are alike. Often silent, their call is a soft “seep.”

These are abundant and tame birds, familiar throughout their range. There have been estimated to be between 60-80 million little bee-eaters. They breed in open country with bushes, preferably near water. This species often hunts from low perches, maybe only a metre or less high. Before eating their meal, a bee-eater removes the sting by repeatedly hitting the insect on a hard surface.

Unlike most bee-eaters, these are solitary nesters, making a tunnel in sandy banks, or sometimes in the entrance to an Aardvark den. They lay 4 to 6 spherical white eggs. Both the male and the female take care of the eggs. These birds roost communally, lined up on a tree branch. 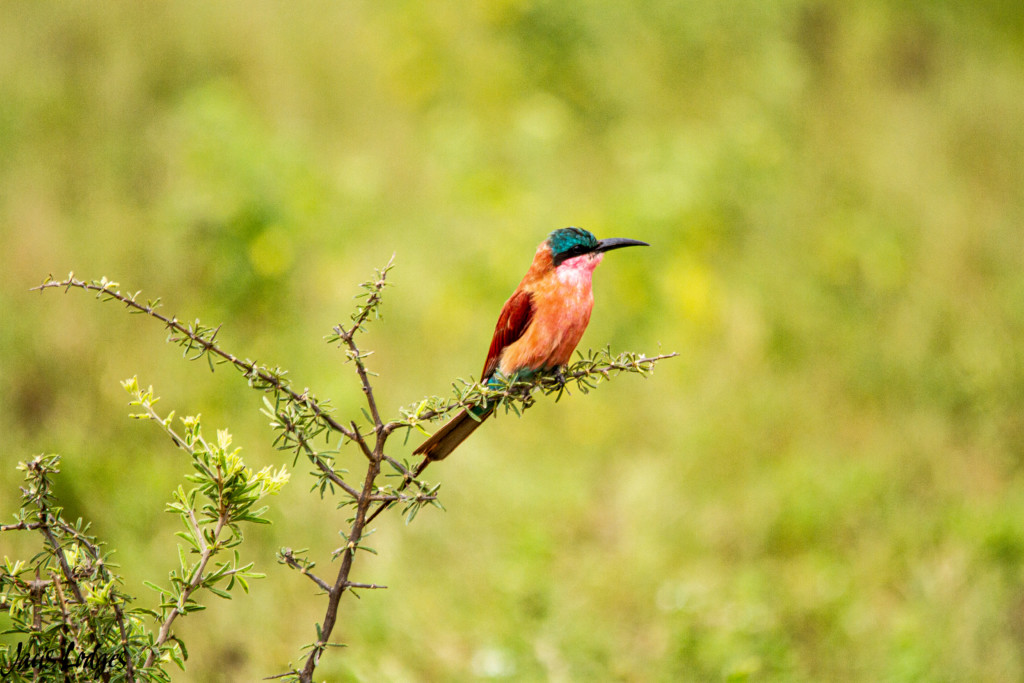 Although 90% of the time we only find this species in the north eastern side of Madikwe, it is sometimes seen close to Jaci’s. The Southern Carmine Bee-eater is an intra-African breeding igrant. They have a 3-stage migration, arriving at their breeding grounds around Aug-Sept. Then in December there is a wide scale dispersal up to 650km southwards mostly over Botswana. This is then followed by a move to Madikwe, as well the rest Northern South Africa, moving as low as Swaziland for the rest of summer.

In Mar-Apr they then migrate back north to the Equatorial savannas of Angola, Zambia, Malawi, DRC and western Tanzania where the temperate climate ensures enough insects to sustain them for another season. 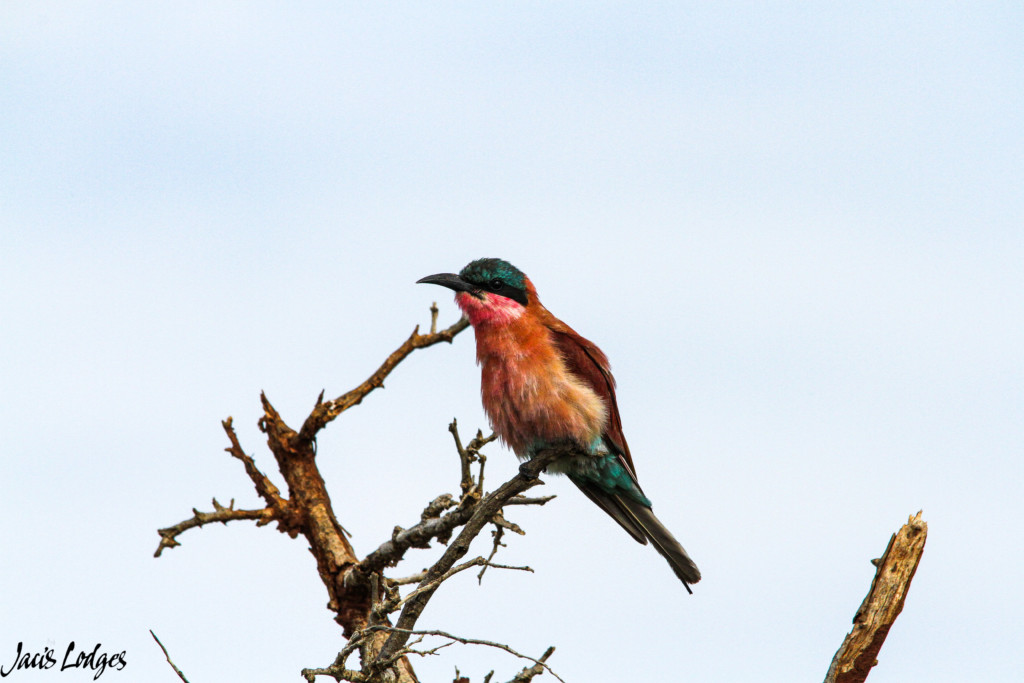 These are one of the Bee-eaters that now and then will catch bees and wasps, but their main food source is flying insects. Like the Rollers, they are drawn to wild fires where they are often seen flying through the smoke, feasting on the escaping flying insects. 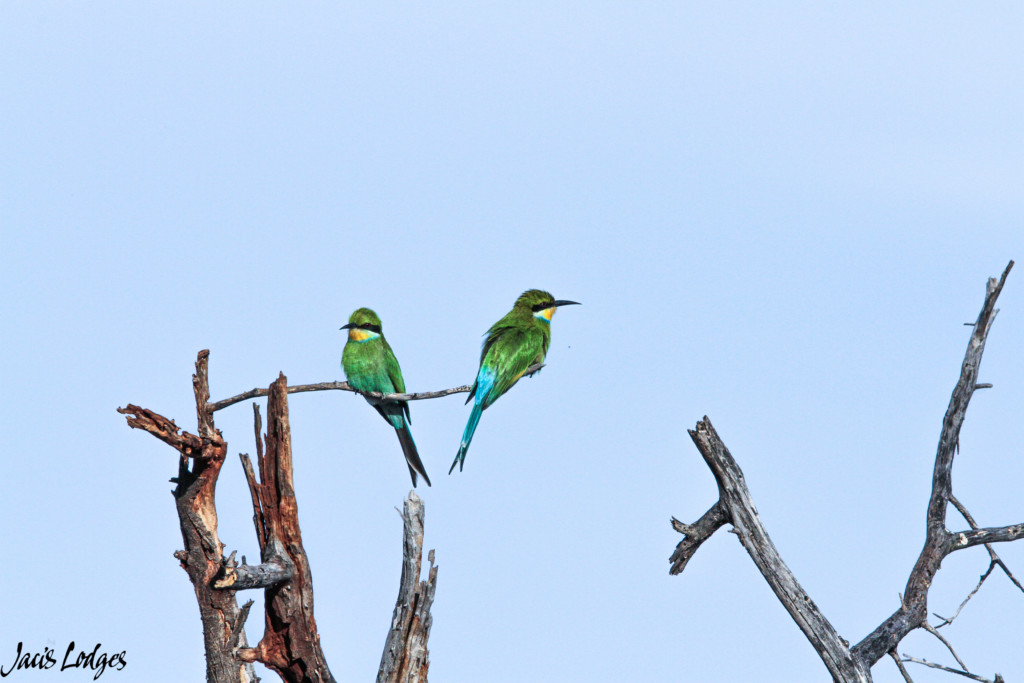 This species, like other bee-eaters, is a richly coloured, slender bird. Its colours and readily visible forked tail make this species unmistakable. It is mainly green with a yellow throat, blue gorget and black eye stripe and beak. It can reach a length of 20–22 cm, including the long forked green or blue feathers. Sexes are alike.

This is a species which prefers somewhat more wooded country than most bee-eaters. This attractive bird is readily approached. Just as the name suggests, bee-eaters predominantly eat insects, especially bees & Wasps, which are caught in the air by sorties from an open perch. Swallowtail has a preference for honeybees. 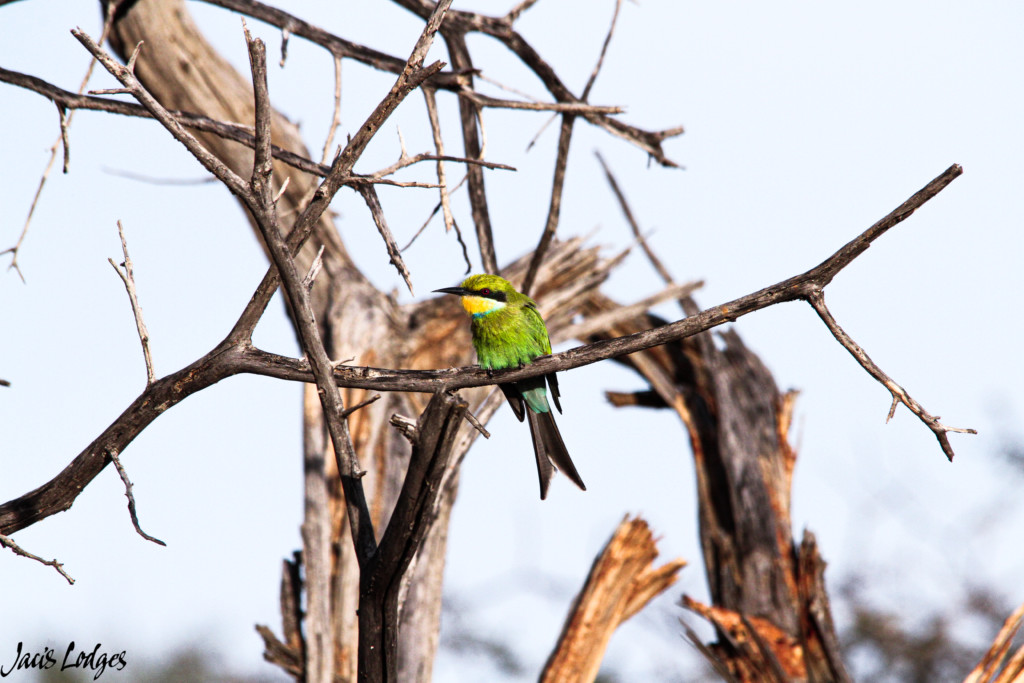 These bee-eaters are nesting as pairs or in very small colonies in sandy banks, or similar flat ground. They make a relatively long tunnel in which the 2 to 4 spherical, white eggs are laid. These birds also feed and roost communally 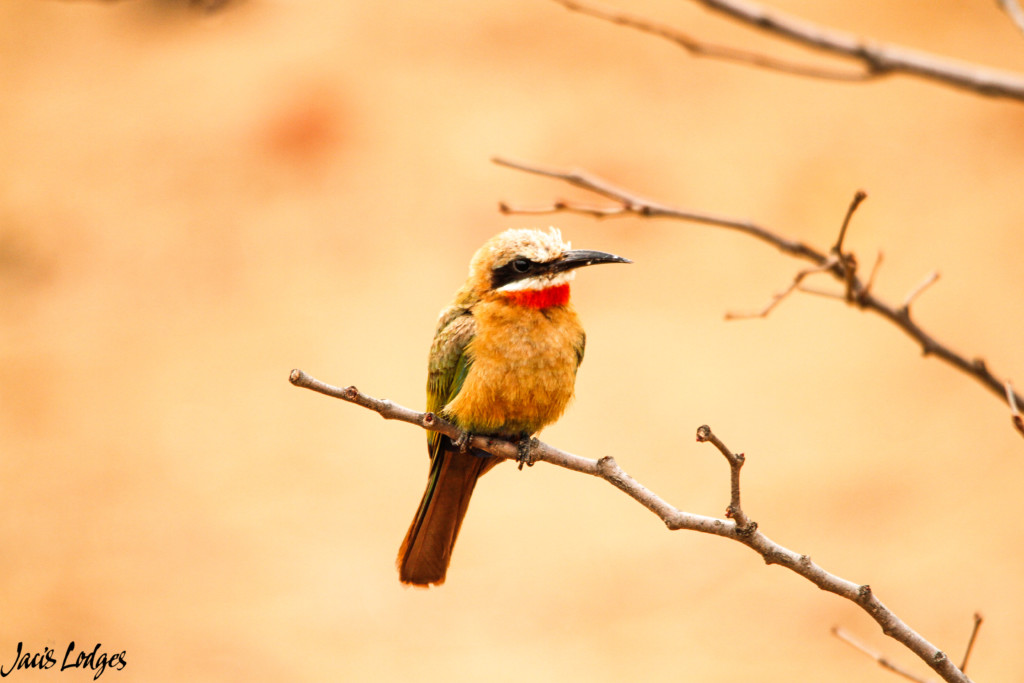 This a species of bee-eater widely distributed in sub-equatorial Africa.

They have a distinctive white forehead, a square tail and a bright red patch on their throat. They nest in small colonies, digging holes in cliffs or earthen banks. They can usually be seen in low trees waiting for passing insects from which they hunt. They do this either by making quick hawking flights or gliding down before hovering briefly to catch the prey. The call is a deep squeak. White-fronted bee-eaters nest in colonies averaging 200 individuals, digging roosting and nesting holes in cliffs or banks of earth. A population of bee-eaters may range across many square kilometres of savannah, but will come to the same colony to roost, socialize, and to breed. White-fronted bee-eaters have one of the most complex family-based social systems found in birds.

Colonies comprise socially monogamous, extended family groups with overlapping generations, known as “clans”, which exhibit cooperative breeding. Non-breeding individuals become helpers to relatives and assist to raise their brood. In white-fronted bee-eaters, this helping behaviour is particularly well developed with helpers assisting in half of all nesting attempts. These helpers may contribute to all aspects of the reproductive attempt, from digging the roosting or nesting chamber, to allofeeding the female, incubating and feeding the young; and have a large effect on increasing the number of young produced. (Allofeeding is where you get food not just from one but from different individuals).

Only 50% of non-breeders in a colony typically become helpers, and whether or not an individual becomes a helper and to whom it provides aid is heavily dependent on the degree of kinship involved. Non-breeders are most likely to become helpers when breeding pairs are close genetic relatives. When faced with a choice of potential recipient nests, helpers preferentially help the breeding pair to whom they are most closely related, suggesting that this behaviour may serve to increase the helper’s inclusive fitness.

Female white-fronted bee-eaters leaving their nesting burrows must avoid pursuit by unmated males who may force them to the ground and rape them. Furthermore, their unwelcome attentions are preferentially against females who are laying eggs and who thus might lay the eggs of their rapist rather than their mate. 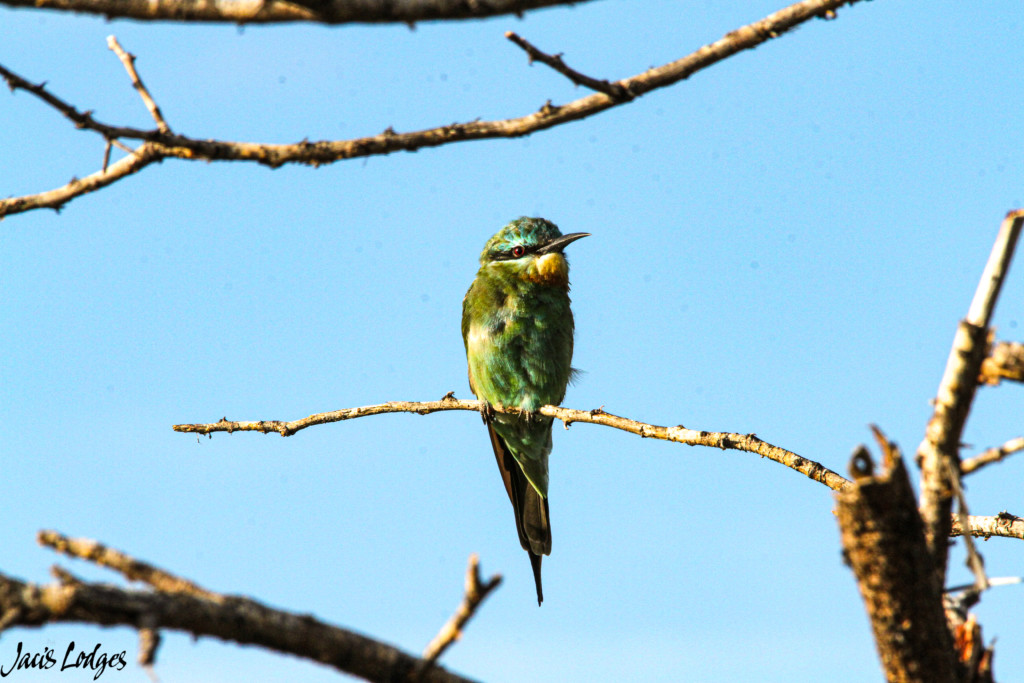 It breeds in Northern Africa, and the Middle East from eastern Turkey to Kazakhstan and India. It is generally strongly migratory, wintering in tropical Africa, although some populations breed and live year-round in the Sahel.

This is a bird which breeds in sub-tropical semi-desert with a few trees, such as acacia. It winters in open woodland or grassland. This species probably takes more dragonflies than any other food item. Its preferred hunting perch is telephone wires if available. 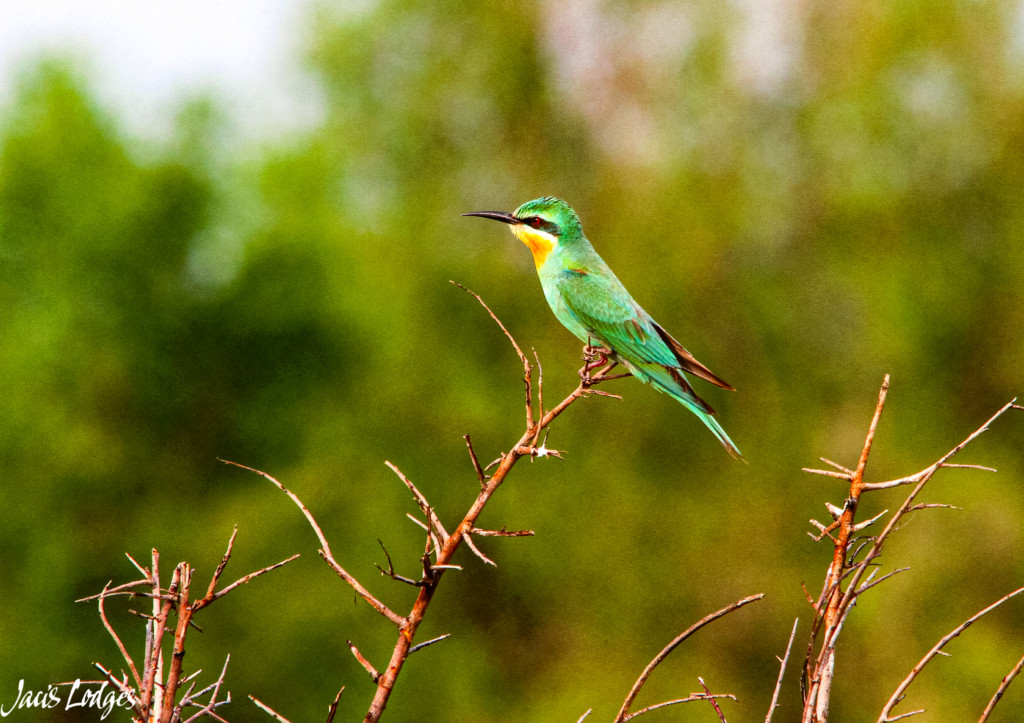 Blue-cheeked bee-eaters may nest solitarily or in loose colonies of up to ten birds. They may also nest in colonies with European bee-eaters. The nests are located in sandy banks, embankments, low cliffs or on the shores of seas and lakes. They make a relatively long tunnel of 1 to 3 m (3.3–9.8 ft) in length in which the four to eight (usually six or seven), spherical white eggs are laid. Both the male and the female take care of the eggs, although the female alone incubates them at night. Incubation takes 23–26 days.

Information we used was collected from different websites as well as some Apps.

Information was obtained from: