Around the Campfire – Photographic Safari

We started off on the first morning, with a group of excited photographers wanting to get going. They had just spent several days on a boat in the Chobe river, and were keen to see what Madikwe had that Chobe didn’t. Our first plan was to head south, and hopefully find Rhino and Elephant. Initially the going went a bit slow, but we managed to find some Elephant. The best of the light had already passed, so at least we had something on what had been a difficult morning. The young Elephant bulls were having a drink, so naturally the photographic brain says, try and freeze the water droplets. So a shutter speed faster than 1/800sec was needed. I explained the settings to the guests, and we started shooting. 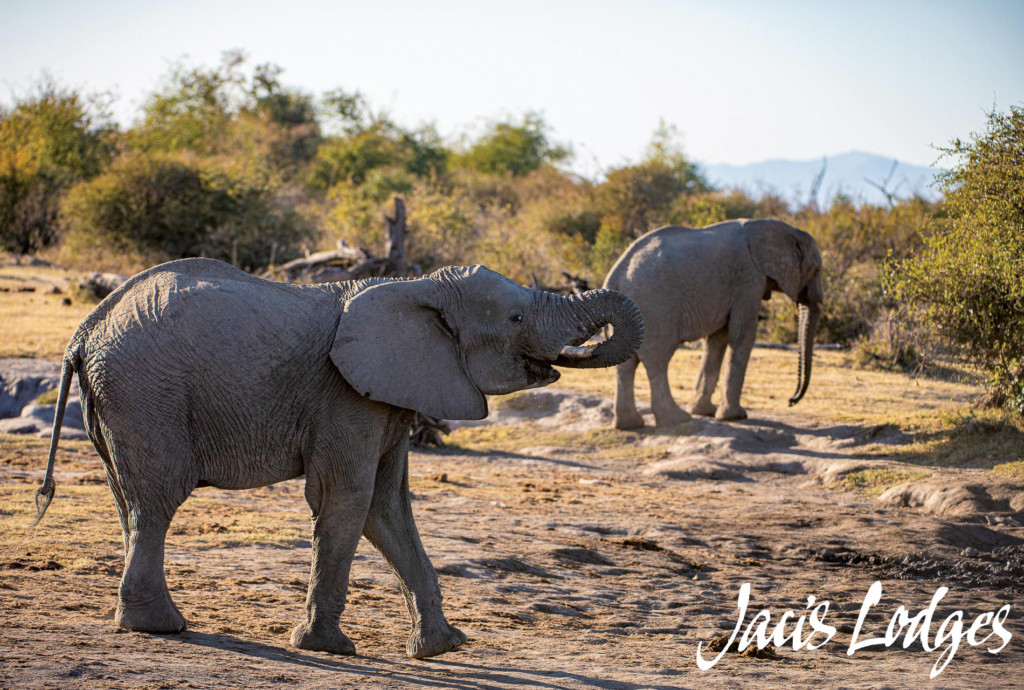 Later in the morning, one of the other guides managed to find the Mahiwa male Lions, close, in the south east. We slowly started making our way there. I explained to the guests that the shooting conditions were difficult now, and that we would have to expose for the shadows. So we set the exposures to +1 EV and waited for our chance. As we expected the Lions were quite lazy by this time, and finding good photographic moments was proving difficult. But we had Lions for the guests, something they didn’t get a chance to photograph in the Chobe. 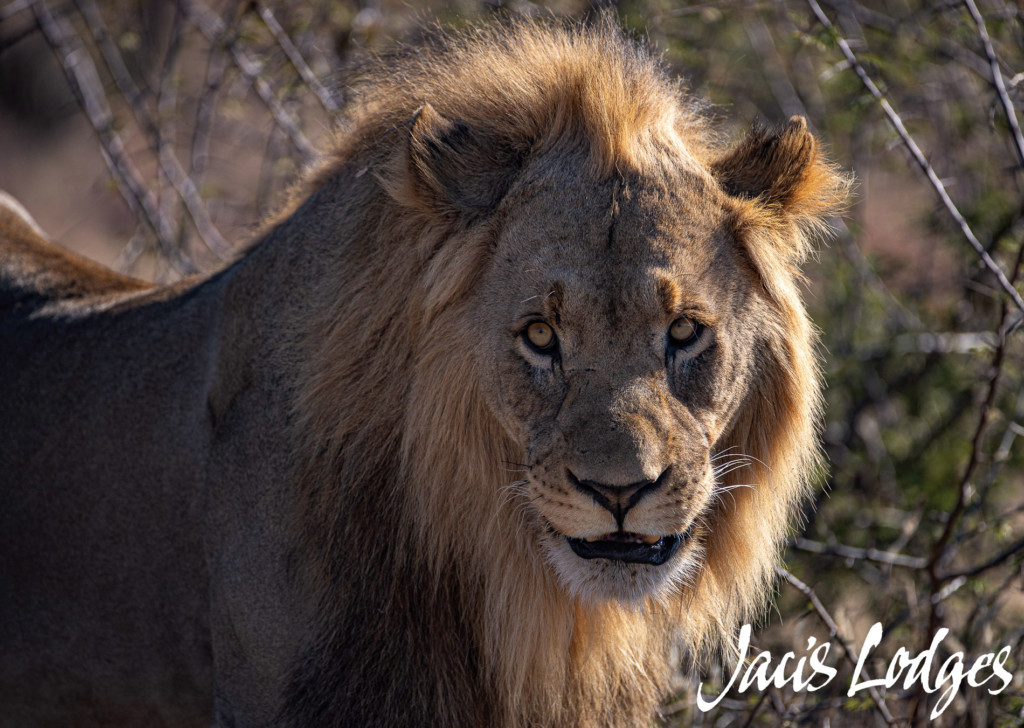 That afternoon, the plan was to head north and look for Rhino. It was amazing how elusive they were in the morning, but an afternoon in the Kalahari Sandveld, and we might get what we were looking for. The first species on the menu was Plains Zebra, just outside Tree Lodge. The Autumn colours on the White-Berry Bushes, created some beautiful frames. 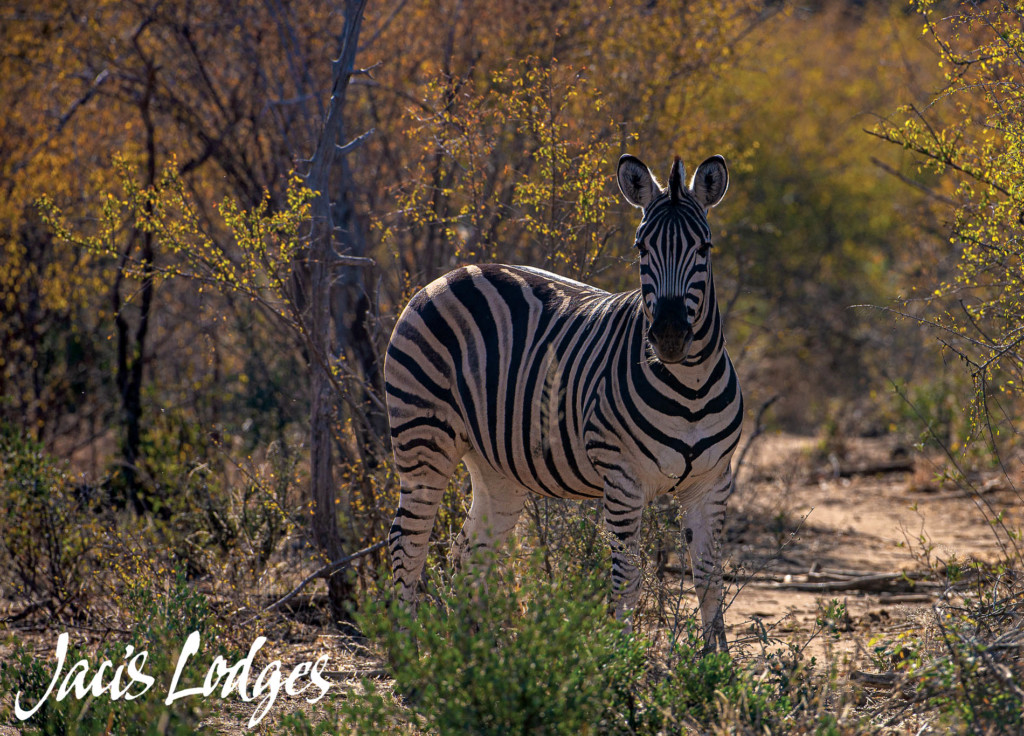 We then encountered a small Elephant herd, a few minutes later. They were incredibly relaxed and gave us the opportunity to get some very close portraits. The focus on the textures of the Elephants, and to try and get a shot of the eyes. 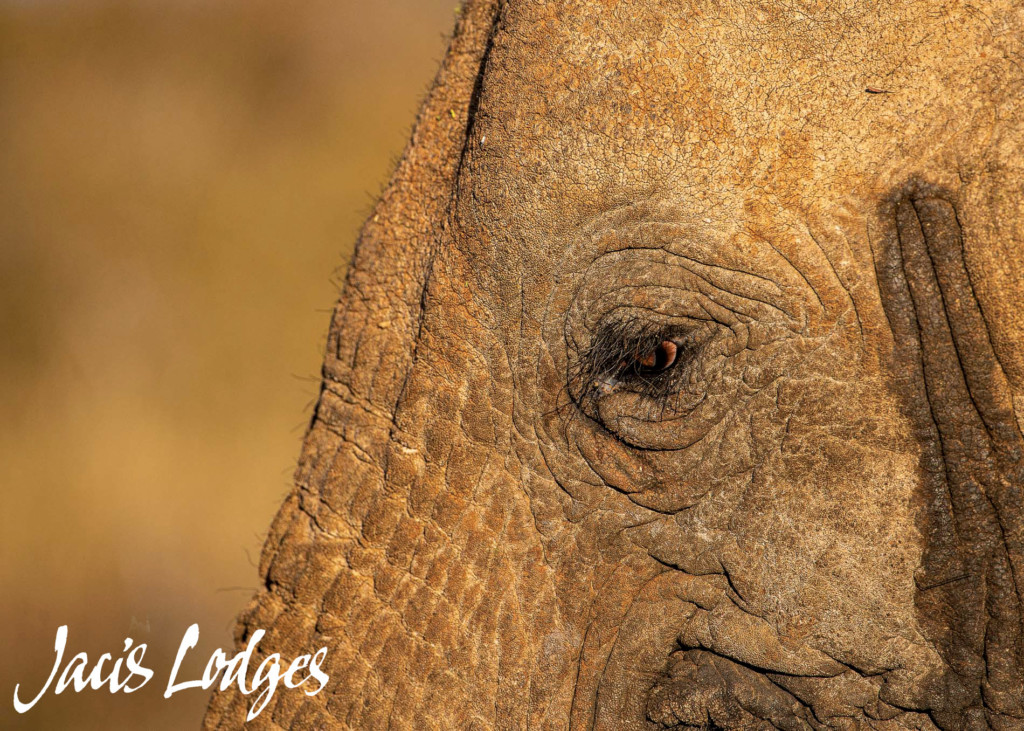 And northward we continued. Again, the going went a bit tough for a while, with little more than Impala and the occasional Zebra. But then a little moment of magic! As we were scouring the area, looking for our intended subject, I noticed some very special in a patch of open bush. If I was right, this would be only the third time I have seen one of these in a twelve-year guiding career. I spoke to the guests about how special this was, before going off-road. And there it was, an Aardwolf in the open. The settings were already set, and all we had to do was take the snaps of this special relative of the Hyena’s. I had the guests go for a very quick shutter speed, just in case the Aardwolf made a run for it. 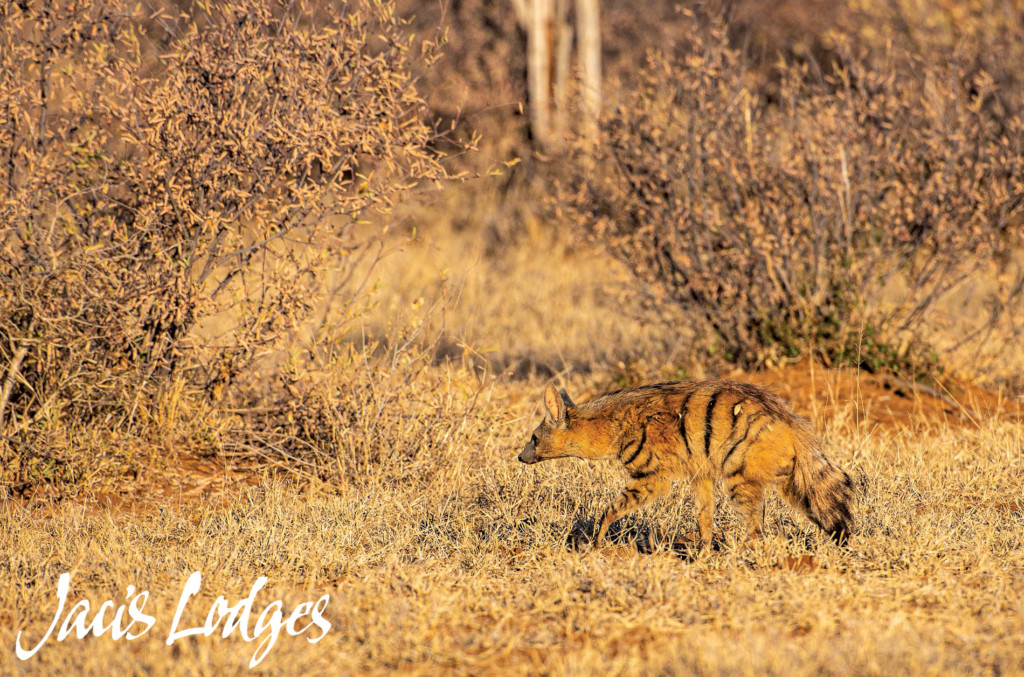 And then everything livened up, we found what we were looking for and spent the rest of the afternoon watching a large bull Rhino move from midden to midden, and some of the guests that had the right wide-angle lens, got some shots of him with the rising full moon.

After that we went for a sundowner and made our way back to camp.

The next morning started off with a bang! We found one of the female Cheetah with an Impala kill, after about 15 minutes on drive. So, the photographic conditions weren’t great, because the sun hadn’t risen yet. We had to wait, and adjust our settings continuously. There were moments where she would look up and some dappled light would break through onto her eyes. This was the shot we were going to try and get. After several minutes, that is exactly what happened. Cheetah’s are nervous feeders, so a little bit of behavioural knowledge wised the group up to the best possible shot. 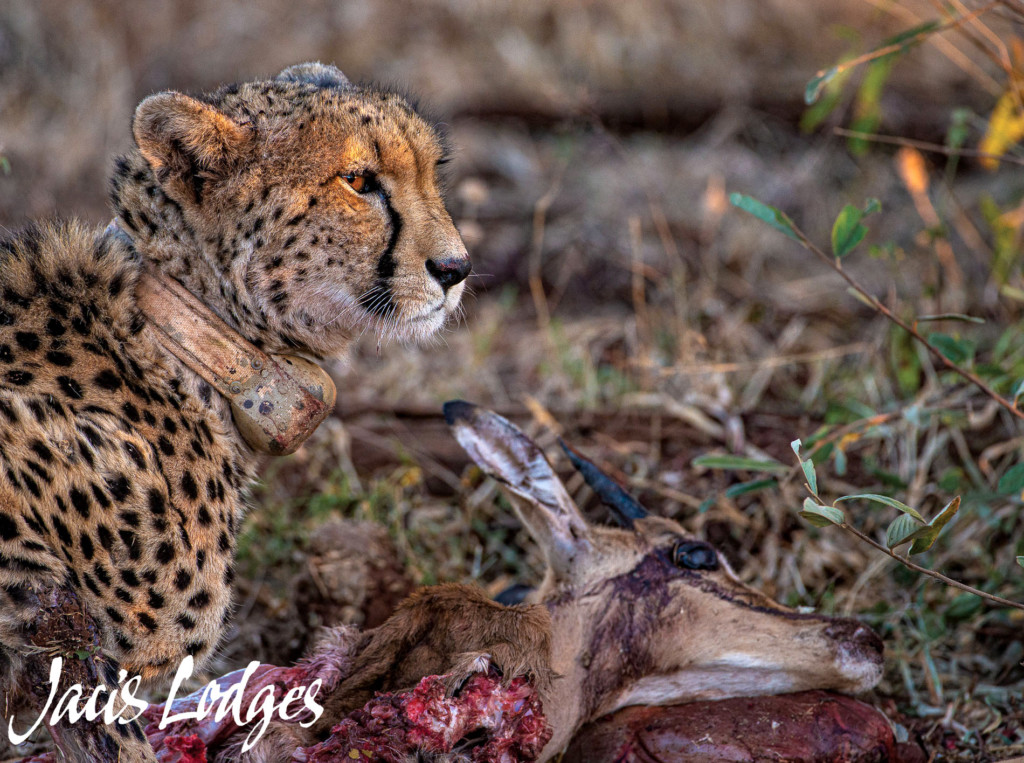 The rest of the morning was largely uneventful. Several Elephant herds, but not great light to shoot them in and some good general game.

The next afternoon’s plan was very simple. We would start off in the central part of the reserve and have an early sundowner and then make our way south to a very productive pan when the light was at it’s best. We encountered some general game, and a really nice troop of Baboons foraging at the top of Ambush alley. The youngsters were playing, while the adults took care of the serious business of feeding and grooming. 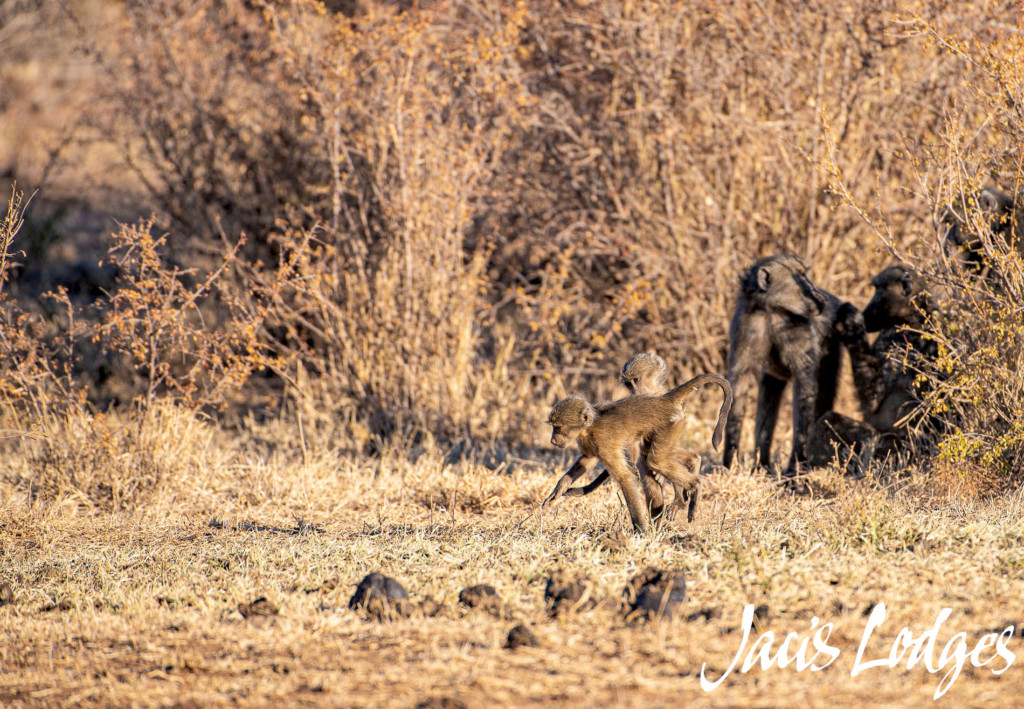 After drinks, we found some Kudu bulls, beautifully back lit, with a dark background. We had already touched on the technique of shooting into the sun and under-exposing, to create a rim lighting on the subject. So, the conditions were perfect for this moment. 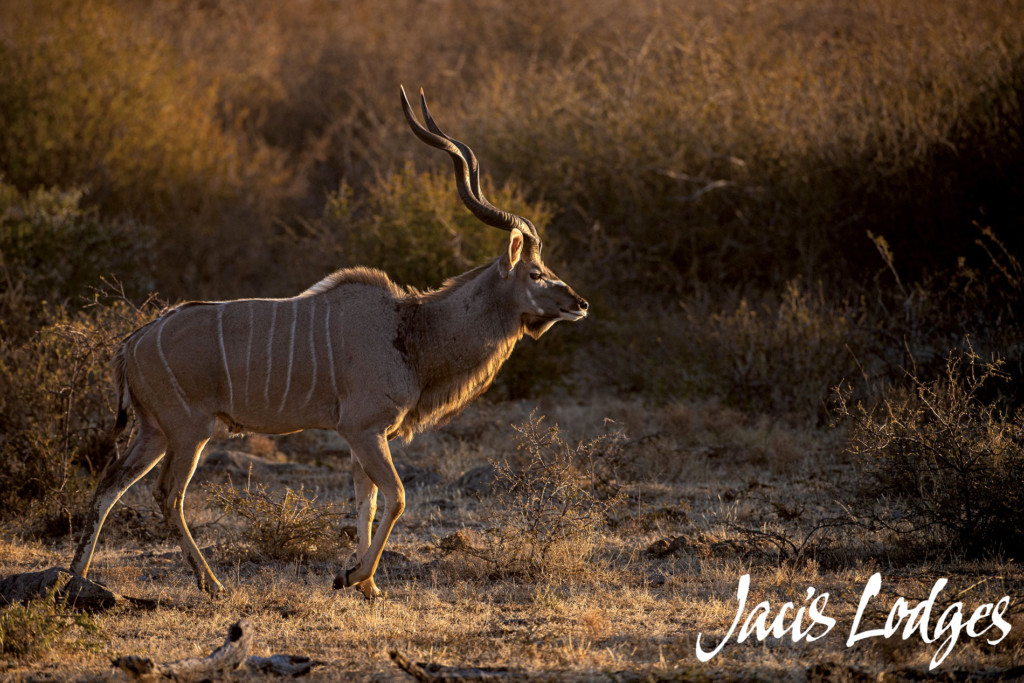 When we got to the pan, it didn’t disappoint at all. There was an Elephant bull already there. We approached and got a “what the hell are you looking at” look from the bull. 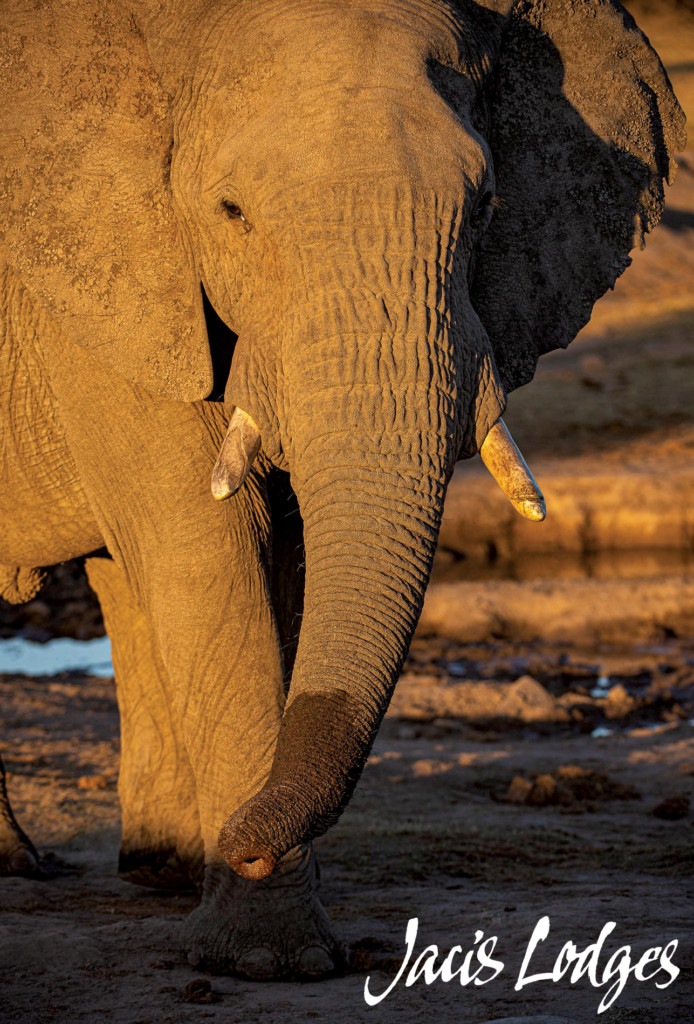 A little while later, another bull arrived and made his way for a drink. The light was starting to drop, so we had to start pushing our cameras to get the pics we wanted. We wanted the water pouring from his mouth as he drank, so needed a minimum of 1/800sec. Setting sorted, and we managed to get some nice images of exactly what we wanted. 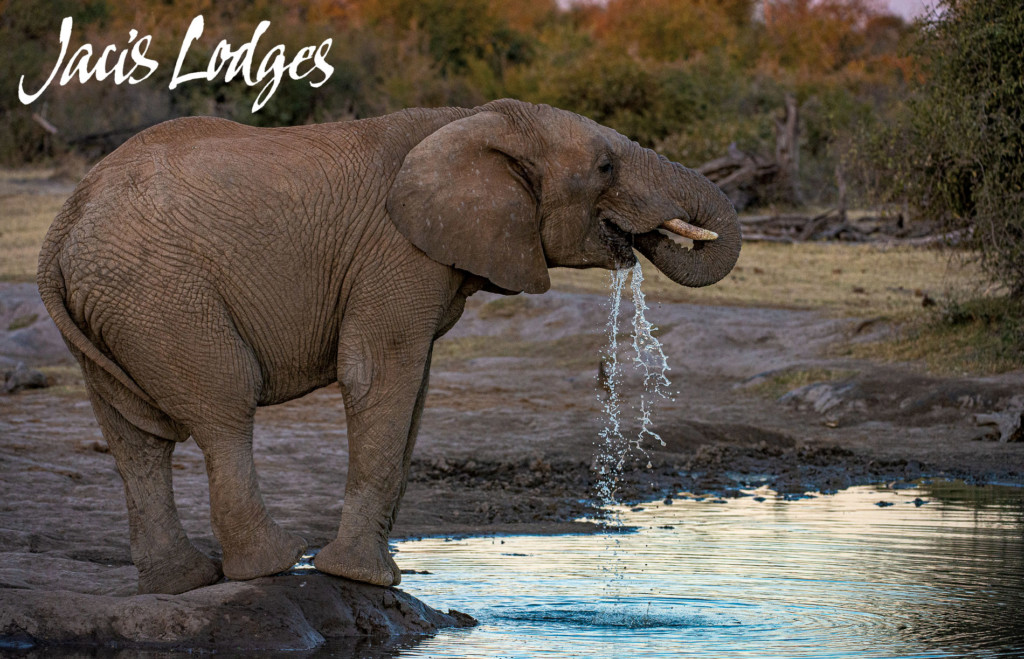 The moon was starting to rise! If he moved around the pan, we might get the shot of him and the full moon. And that is exactly what he did. It’s nice when the Wildlife listens to your suggestions, but that is the rarest moment of all in the African bush. 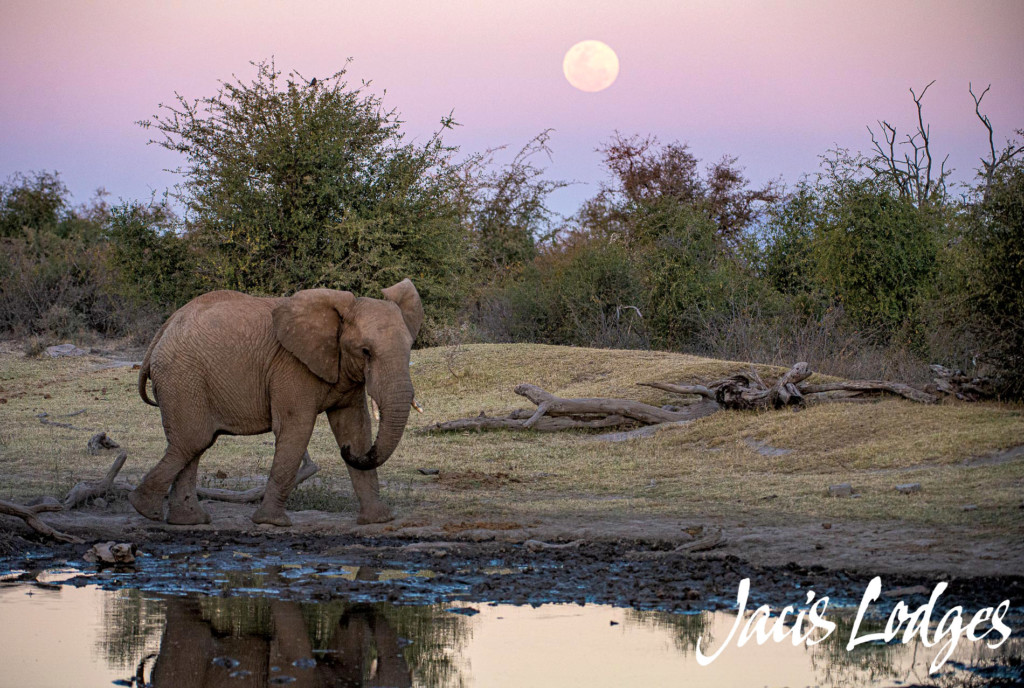 A little while later, at a different location. A female White Rhino and her calf were found. The light by this stage was ultimately gone, so we switched to try some slow shutter speeds. The results were really good. 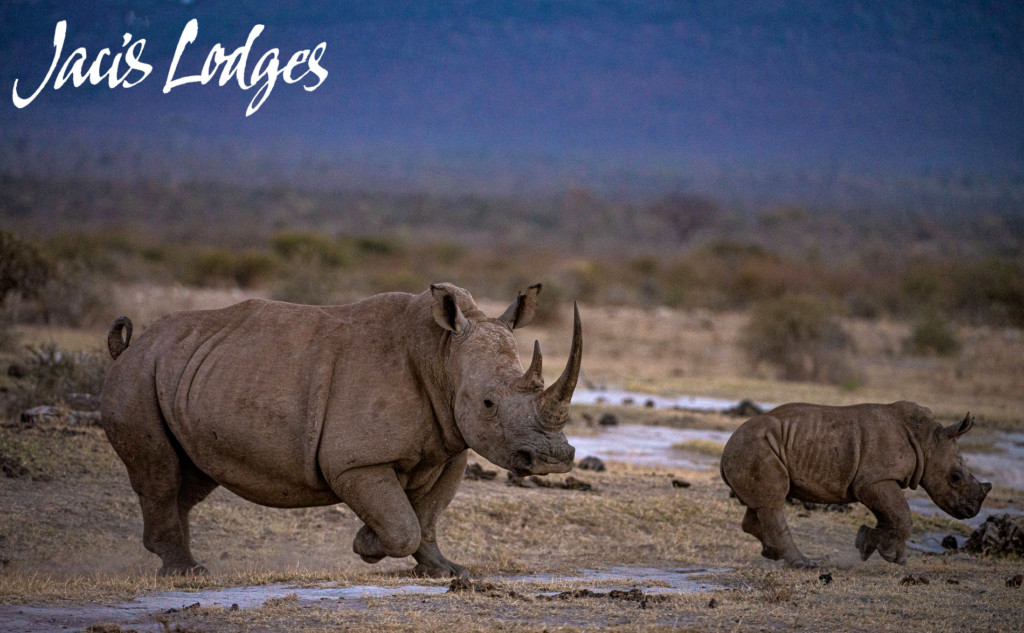 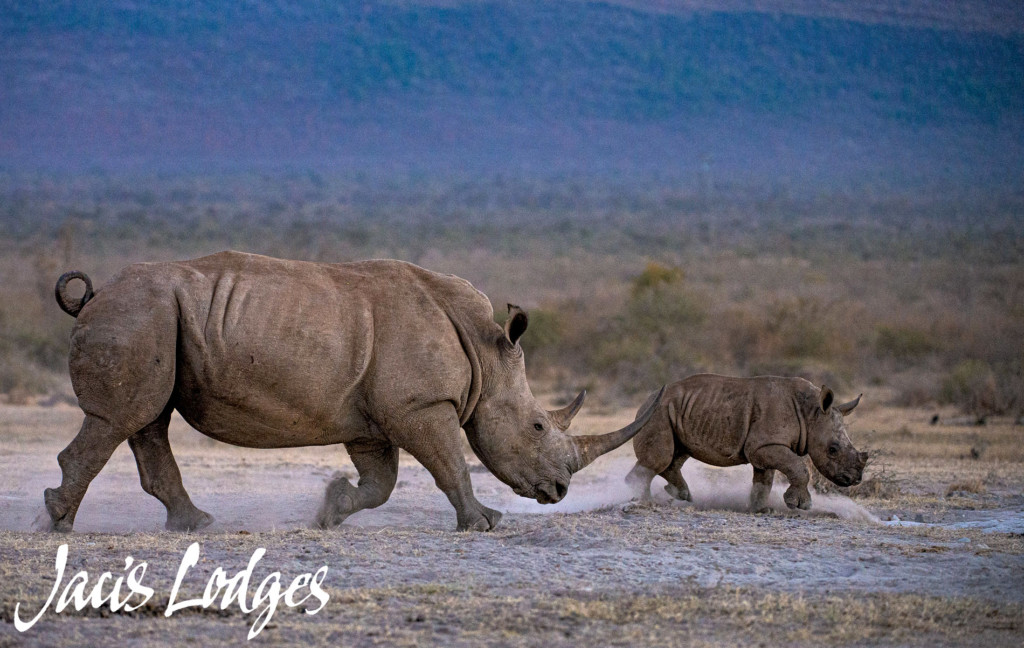 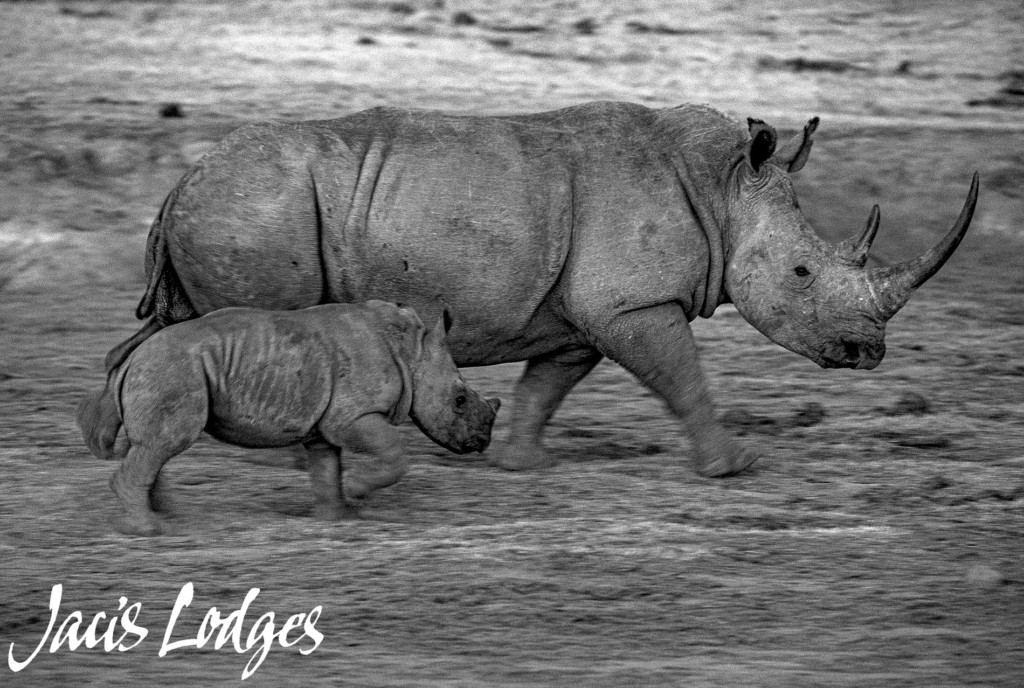 The next morning, we had a relatively quiet one. We went to the north of the reserve and got some nice general game including Springbok. We found 2 Lionesses, but they were moving in an area too thick for us to try and follow. 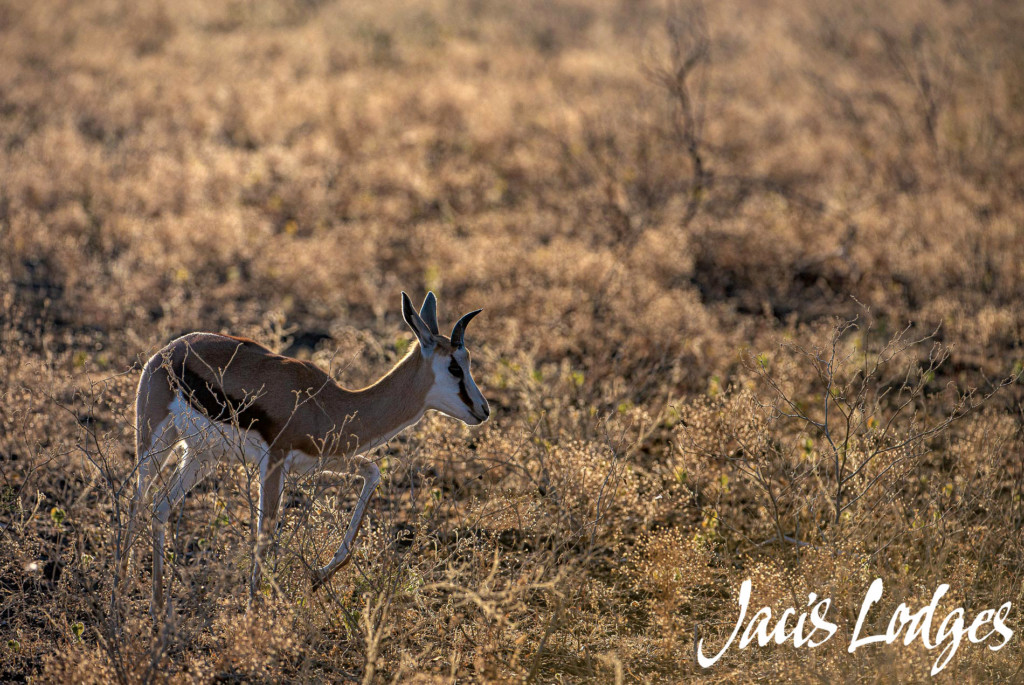 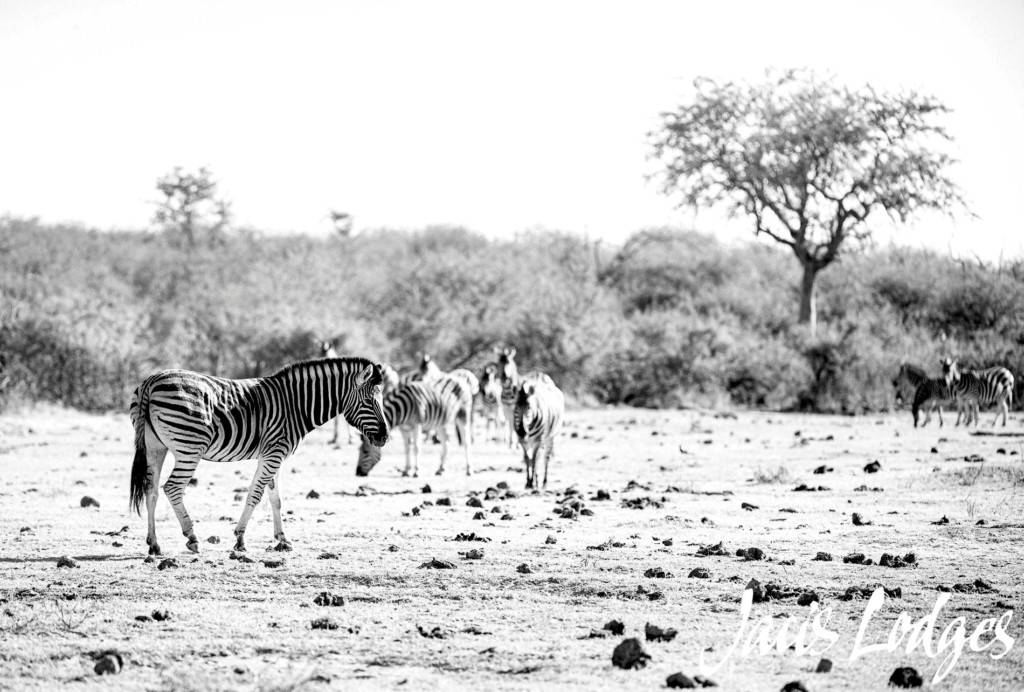 That afternoon however, we had something special in store. A male Leopard, affectionately known on Madikwe as Munye, was found on a Duiker kill. We made our way to the south west, and had a great sighting of him feeding on the unfortunate dwarf Antelope. Initially we had him feeding in a large Leadwood tree, but after a foot fell off, he made his way down and fed on the ground. 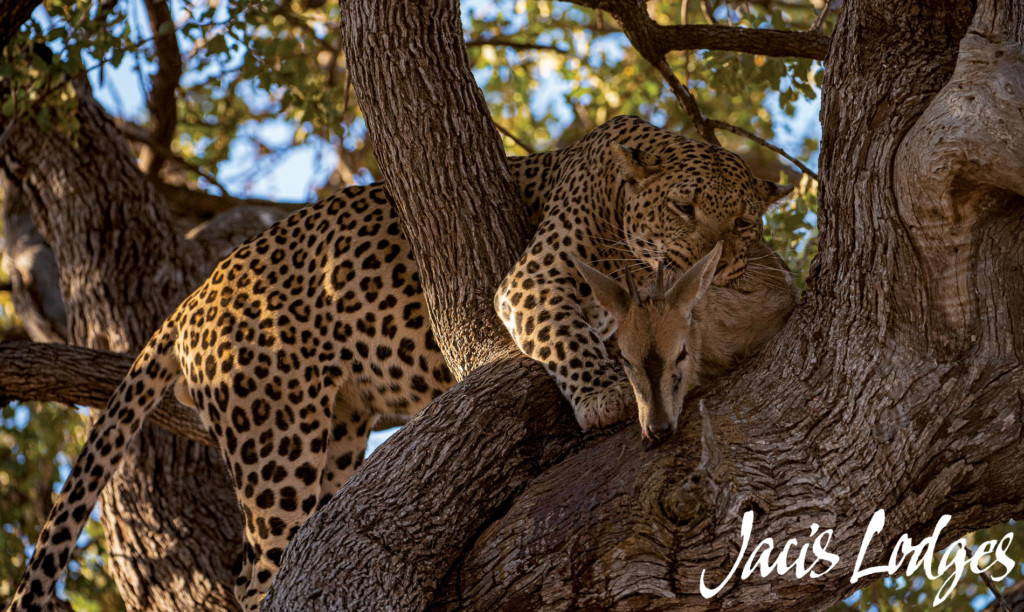 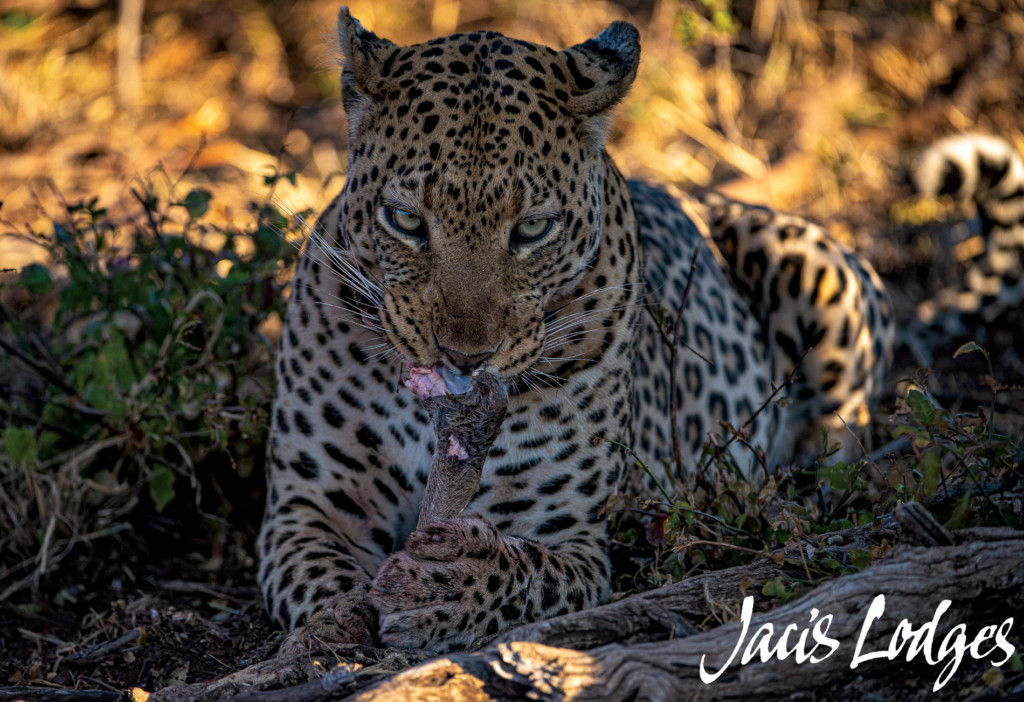 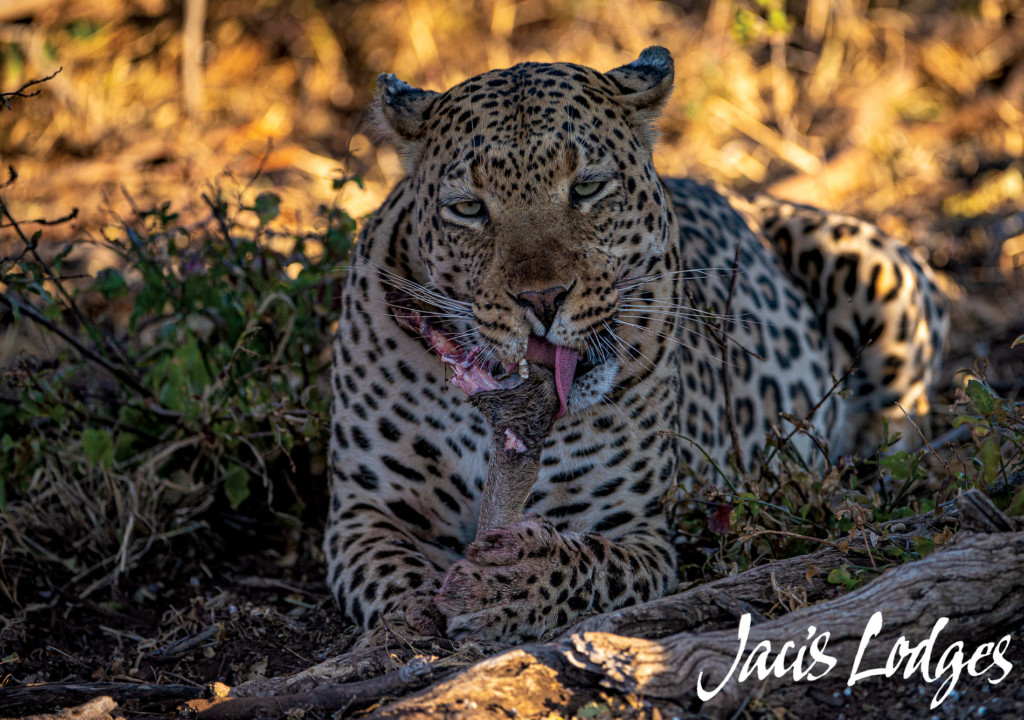 We later picked up on some more really nice Rhino, but this time we had the opportunity to try some nice back lighting. The sunset was golden, and there was quite a lot of dust to diffuse the light. Creating some gorgeous photographic moments.’ 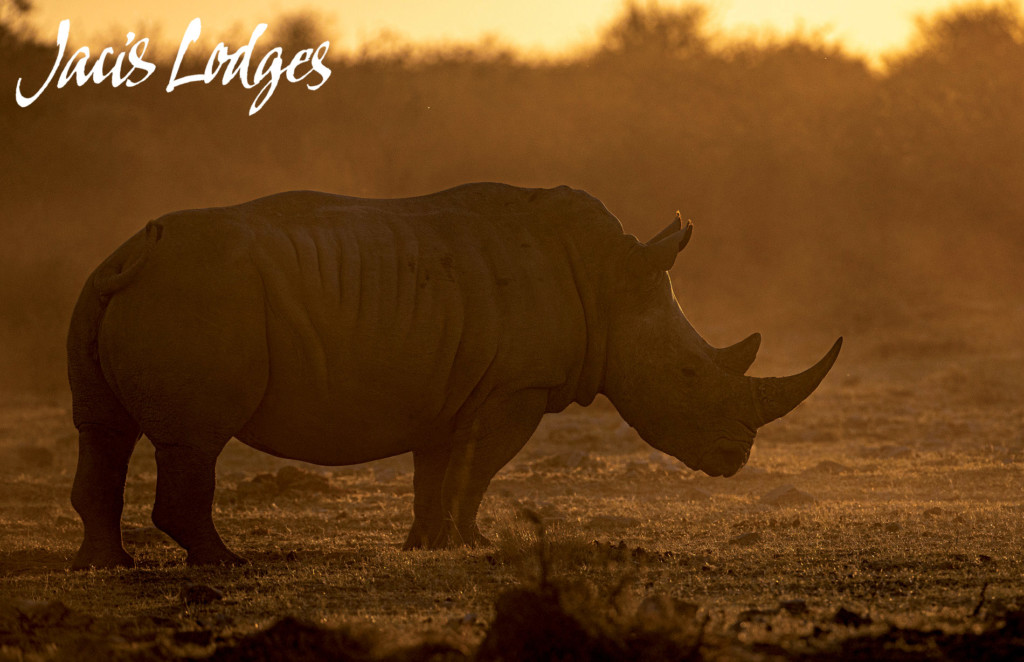 On the last morning, our plan was to head to the central part of the reserve and go to a Spotted Hyena den. The start was a bit slow, but we managed to find 2 Lionesses with a Buffalo calf kill. Initially we found one of the Lionesses drinking at a large dam, but she was walking back to the kill and was joined by the other Lioness. The reunion was playful. The kill was hidden in some very thick bush. The Hyena pups didn’t play the game and we left the den empty handed. All in all, a very enjoyable 4 days on safari. 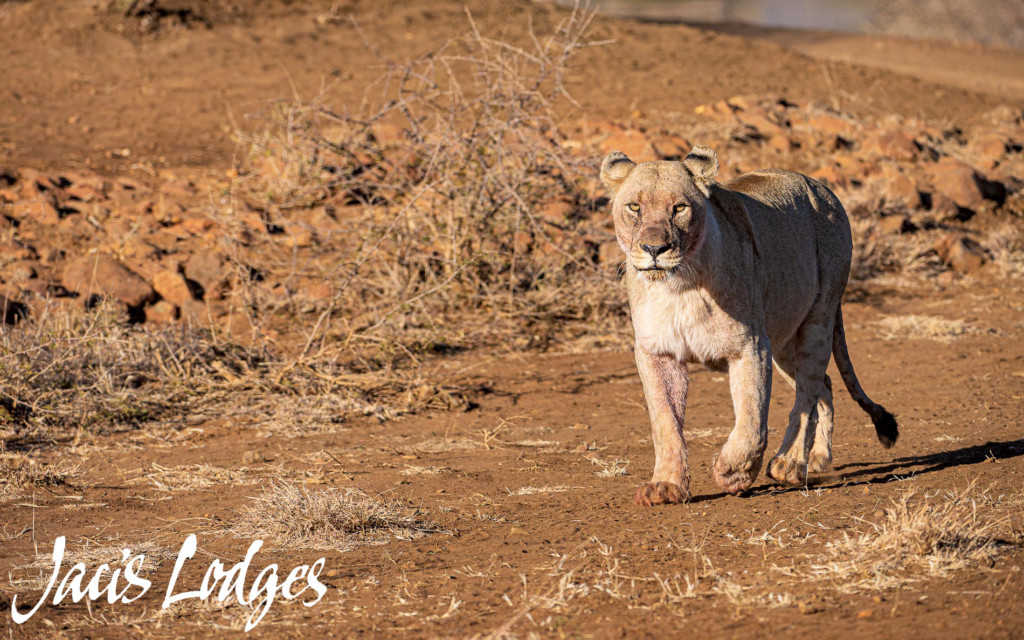 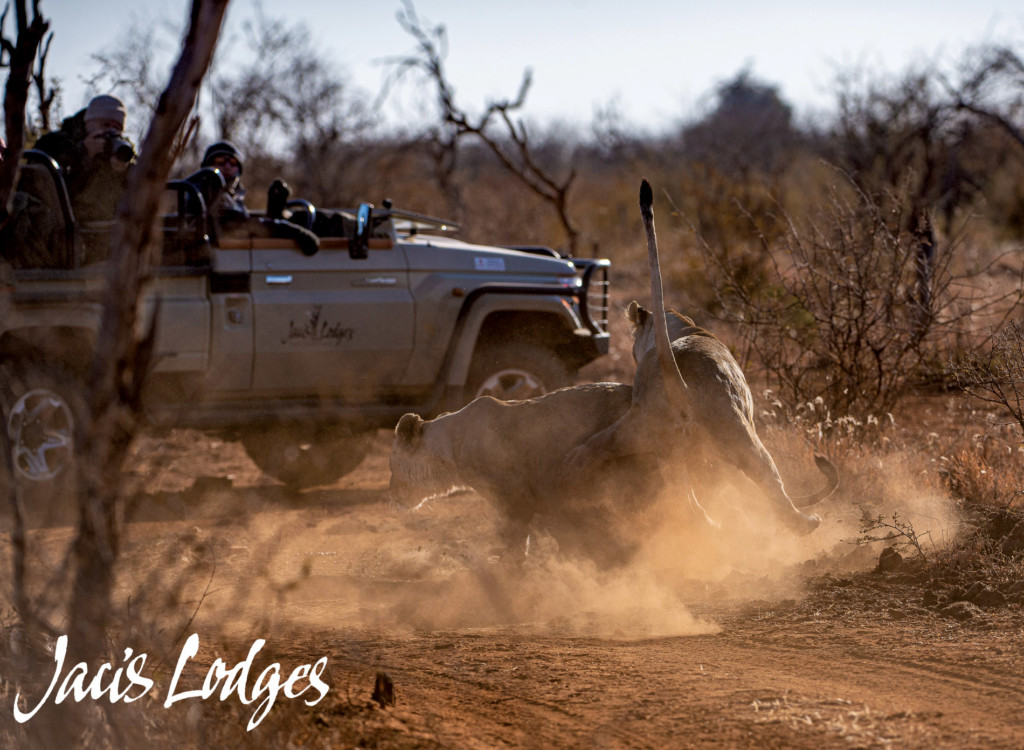 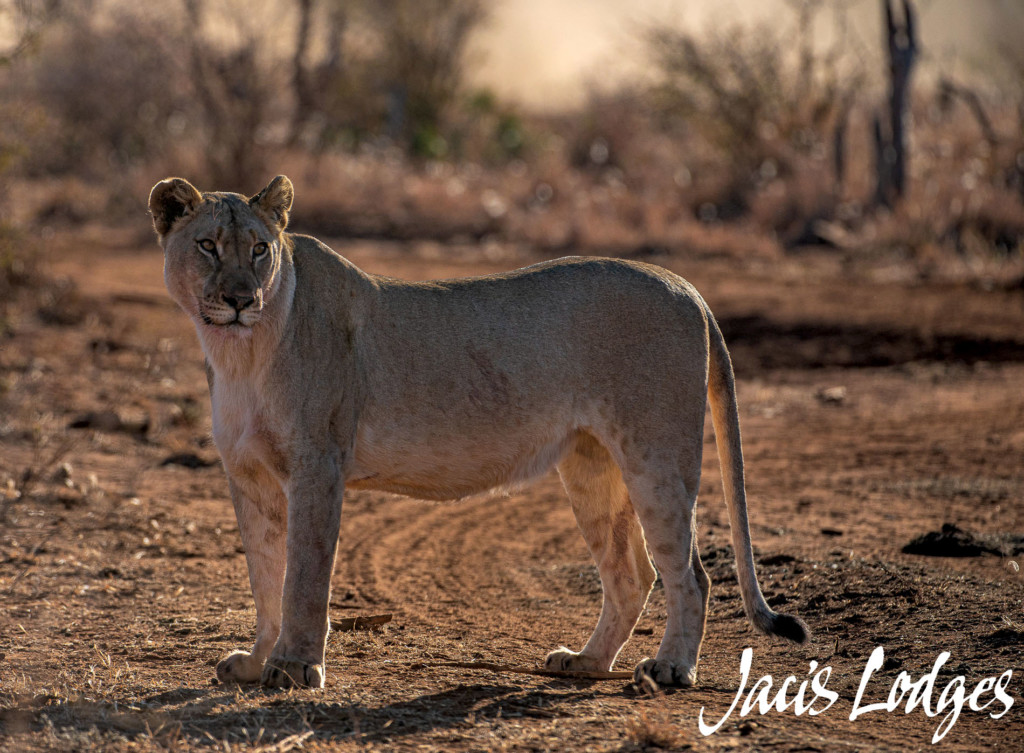