Around the Campfire – January Bush and Lodge Update

After a very hot summer here in Madikwe, many hours of staring up at the clouds building in the evening sky and wondering if it was going to rain, we were finally rewarded for our patience and good behaviour with some lovely much needed refreshing rains.

It all came with quite an unexpected Bang, the next morning and 57mm of rain later, our Wetlands, Dams and Rivers were full. Thankfully that was not the only rain we received, as for the next few days that followed we totalled up 80mm of rain for one week. Followed by a few more refreshing rains the week thereafter. As all can imagine, the grass is sprouting and there is a lovely glow of green to be seen all around the reserve. 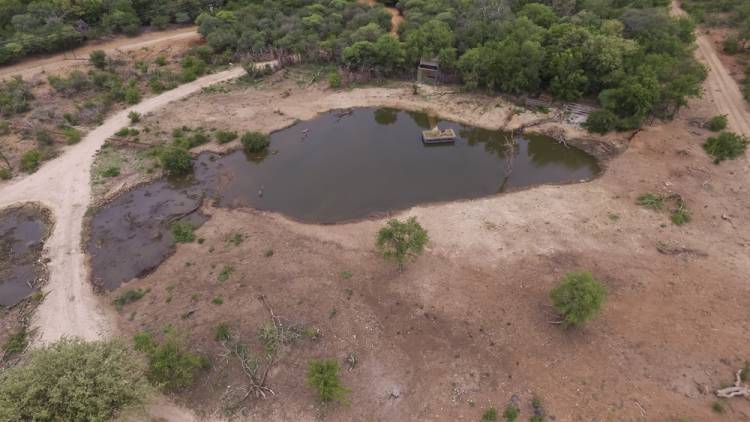 The Jacis Waterhole and start of the wetlands looking full

On one of the rainy mornings, as the guests braved the wet and cool weather, their patience was rewarded as they came across a female leopard that made use of the rain to pull down an impala. She then proceeded to drag it up a Marula tree a couple of km’s from the lodge. Predators often use rain to mask their smell and the sound that they might make, so these conditions do sometimes favour predators as the prey’s senses are being disturbed by the rain. 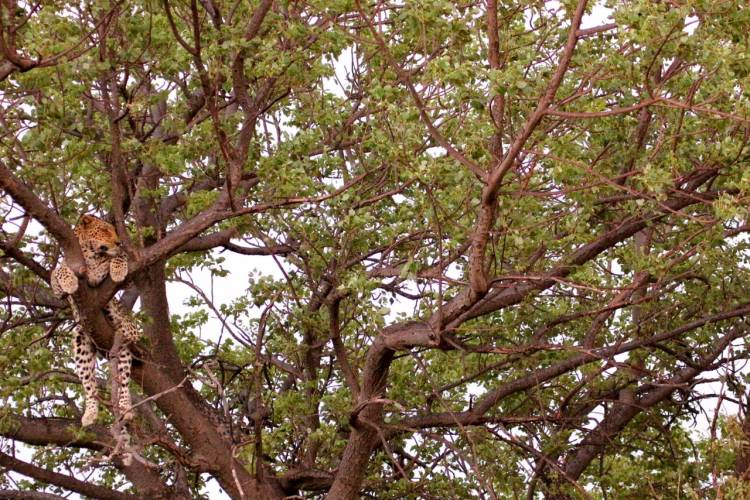 Leopard up a Tree

With spring approaching (very late due to late summer rains) there have been a lot of babies around ranging from Impala, Elephant, Wildebeest and then also some lion cubs. The one female had three cubs close to Vleisfontein which is the Head Quarters of the park and another had hers on a Koppie in the North East of the park, the female with the ones in the Koppie is doing well and she is slowly starting to bring them down so there has been a large improvement of sighting with her and the fur balls. The other female unfortunately lost all her cubs. We are not exactly sure what happened but most of the speculations are that she left them when she went out hunting and possibly Hyenas or another Lion came across them and they were unfortunately killed. 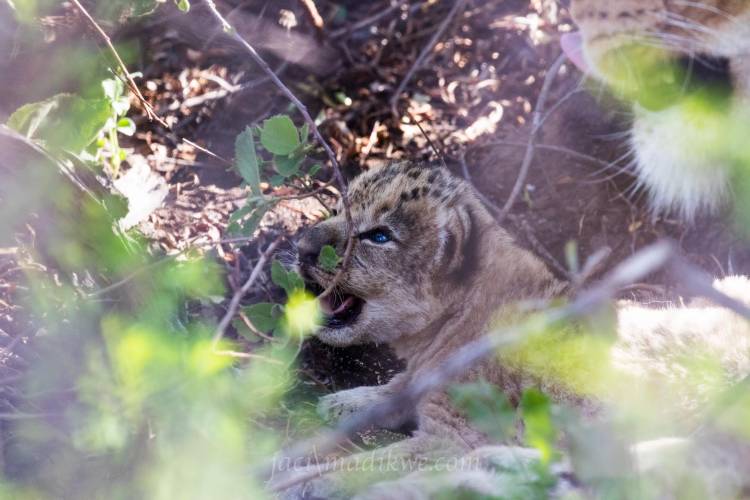 One of the lion cubs

After a couple of months the wild dogs appeared on our side of the reserve and spent almost a full month close to and around the lodge, they were seen twice around the #Terrapin Hide, they had numerous kills close to the lodge which led to quite a lot of excitement from guests and staff, but like the Wild dogs are in there nomadic manner they have moved on once again and we are all waiting in anticipation for when they will remarkably reappear around the lodge once again. 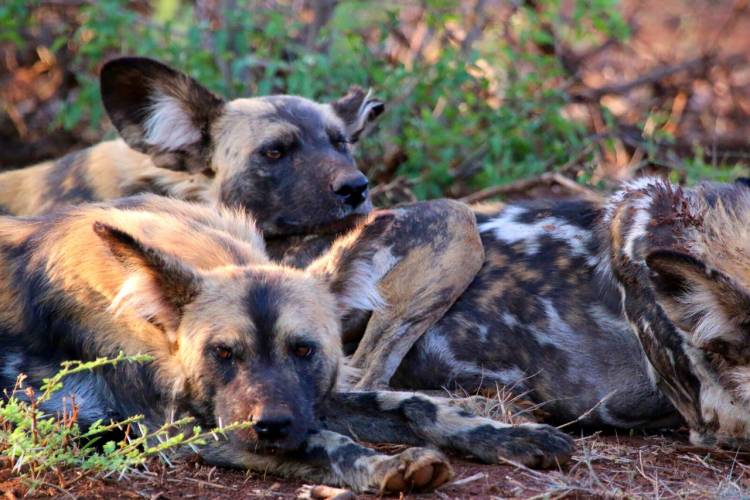 We have an assortment of new and exciting developments happening at both lodges:

Safari Lodge is getting a bigger boma. As I sit here and write, I can hear the whole team busy digging away and the chatter of happy voices as everyone is getting involved in building a new bigger boma into which we can accommodate all our guests. The whole team is very excited about this new extension, (as we all know a change is as good as a holiday) and by the end of next week we will all celebrate together with our guests at the lodge with a reopening Boma dinner. 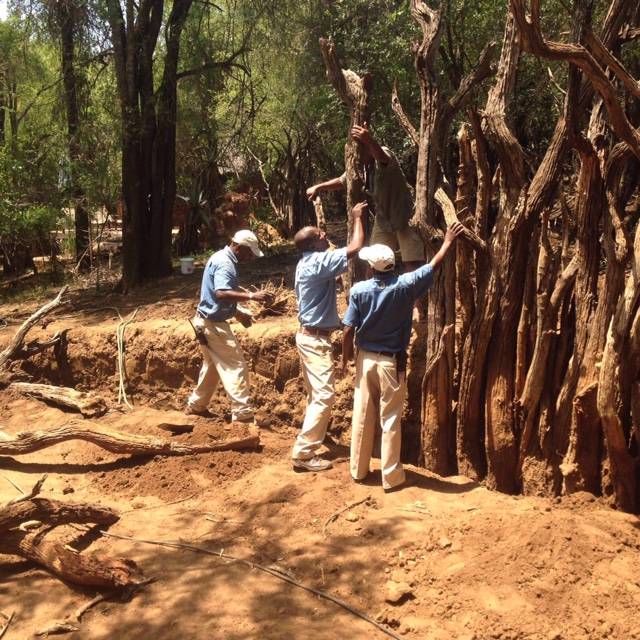 Extending the Boma at Safari Lodge

Tree Lodge: Boule in the Bush? We have the location, we have the terrain marked out, we have the instructions from google on how to build it………Next step is to start construction. The Jaci’s Ladies team have already challenged the Jaci’s Mens team to a game, and the challenge has been accepted, let the games begin. Watch this space for the Champions.

River Path Outdoor Gym: Who would have thought that you could do Sit Ups on a Rhino, Step up a Giraffe’s Neck, Air Walk between a Waterbucks Horns or even handle a Cobra….Well at Jacis Lodges you can. We have a unique Outdoor gym that is being erected along our existing River Walk path between our two lodges. Each Obstacle/ Piece of equipment is designed to the shape of some of the animals that you might see out on drive, while all the apparatus is designed to give you a full body work out… 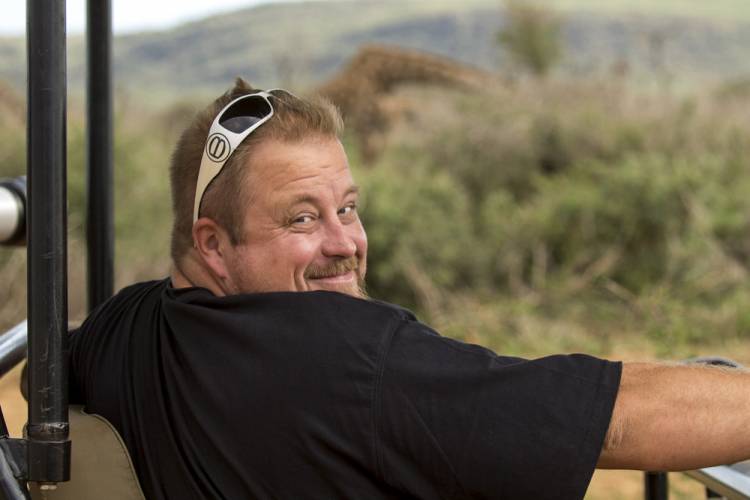 We welcomed a new face to the Jaci’s Lodegs Team, as Andrew Aveley (The Badger) has been to the lodge for his first Residency of 2016. The whole team has welcomed him with open arms and he has already become part of our family. The guiding team has especially enjoyed having him around with his helpful and professional insight to photography and all of them have taken up any opportunity that they may have had to learn a few tricks of the trade from him. A breeze of photography can be felt though out the lodges as all that have seen his pictures and listened to him talk about photography, have had a little photographic spark ignite within them.